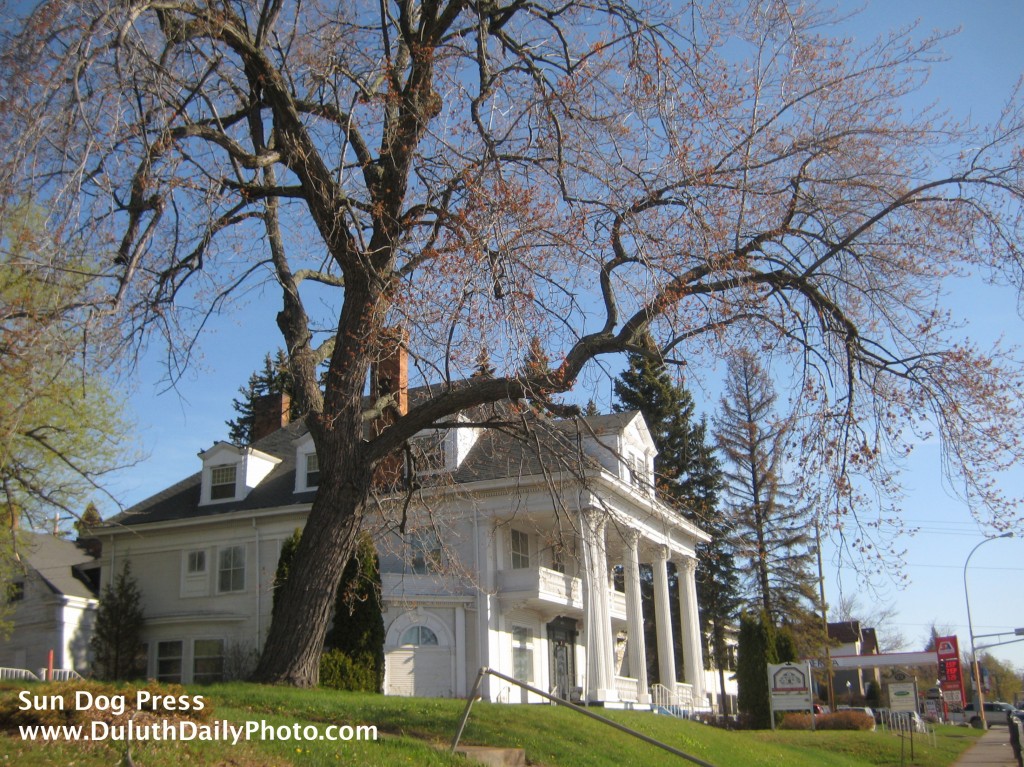 When we were choosing were we would live as we prepared to move to Duluth five years ago, we took a walk around the neighborhood. I remember walking by this house and taking a photo of it to send to my daughter, telling her, this is in the neighborhood. Now it will be torn down so that Walgreens can make a bigger, better big box store.

Story from the Duluth News Tribune

Duluth city councilors are expected to approve a simple easement vacation Monday that will allow a Walgreens project on East Superior Street. That means a sprawling mansion and carriage house will be leveled this year.

In the 1970s, the city of Duluth published â€œDuluthâ€™s Legacy: Architecture,â€ a comprehensive guide to the cityâ€™s historic buildings and houses. Among the homes featured in the book is the Louis S. Loeb House, a white, neo-Greek mansion built in 1900 at 1123 E. Superior St. Built for the president of a wholesale wine and liquor company, it was designed by noted Duluth architect John J. Wangenstein, among Duluthâ€™s â€œWhoâ€™s Whoâ€ in historic architecture.

But a vote by the Duluth City Council on Monday probably will lead to its demolition.

â€œIt makes me sick,â€ said Bob Berg of Duluth, who restored a 1904 house also designed by Wangenstein. â€œIt is historic. Itâ€™s one of my favorite old houses in Duluth.â€

Among the five other properties that would be razed are two houses designed by renowned architect Oliver Traphagen along with Francis Fitzpatrick.

The houses at 1120 and 1124 E. First St. were built as rentals in 1891 for James W. Norton, president of Norton Lumber Co., said Maryann Norton, a local historian who has extensively researched Traphagen.

Traphagenâ€™s commercial buildings often were Romanesque revival, but his homes featured all styles, Norton said. Of about 120 Duluth houses Traphagen designed, about 40 are left, she said.