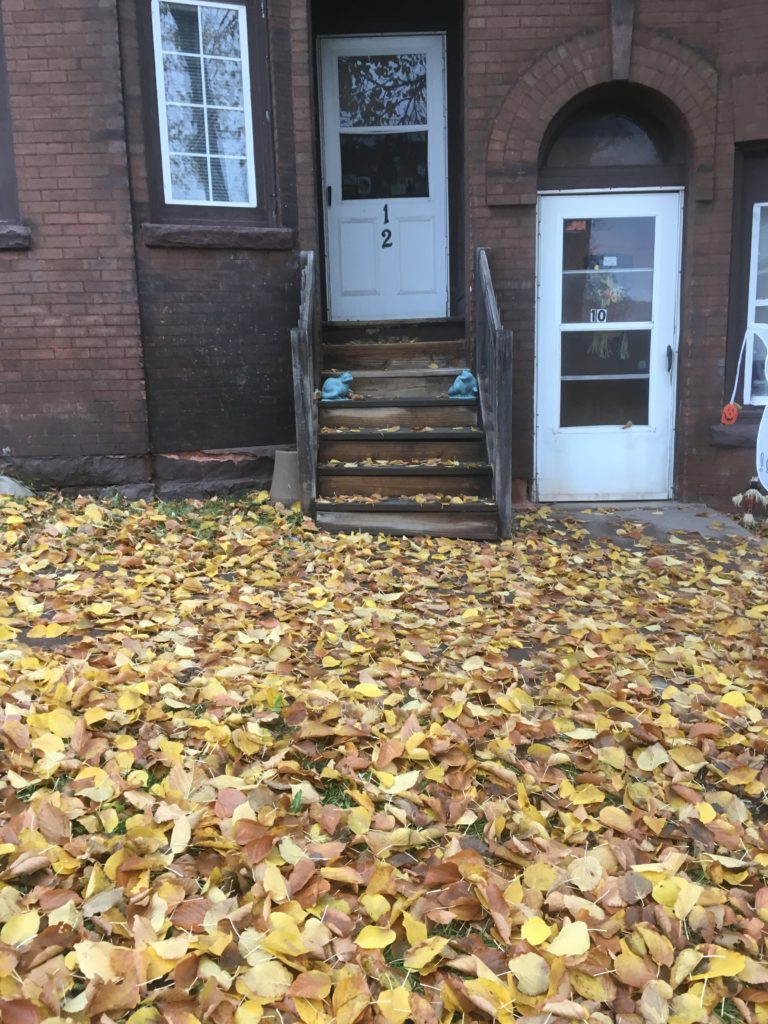 The carpet of leaves in front of these apartments is pretty. 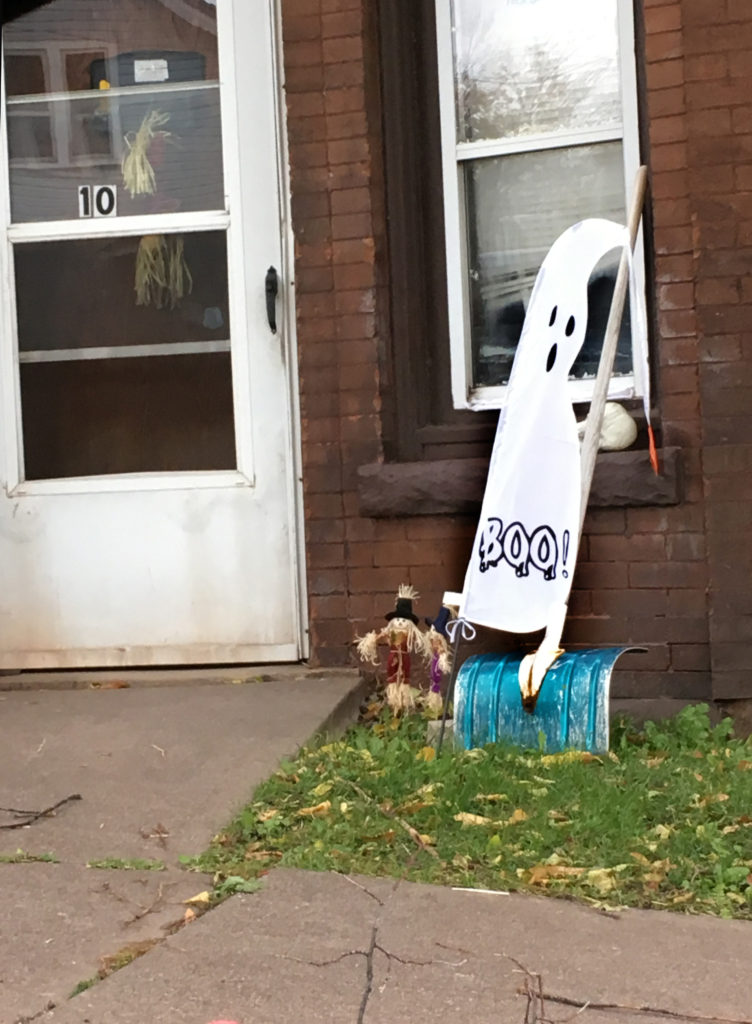 I took this photo in the Lincoln Park/West End neighborhood. 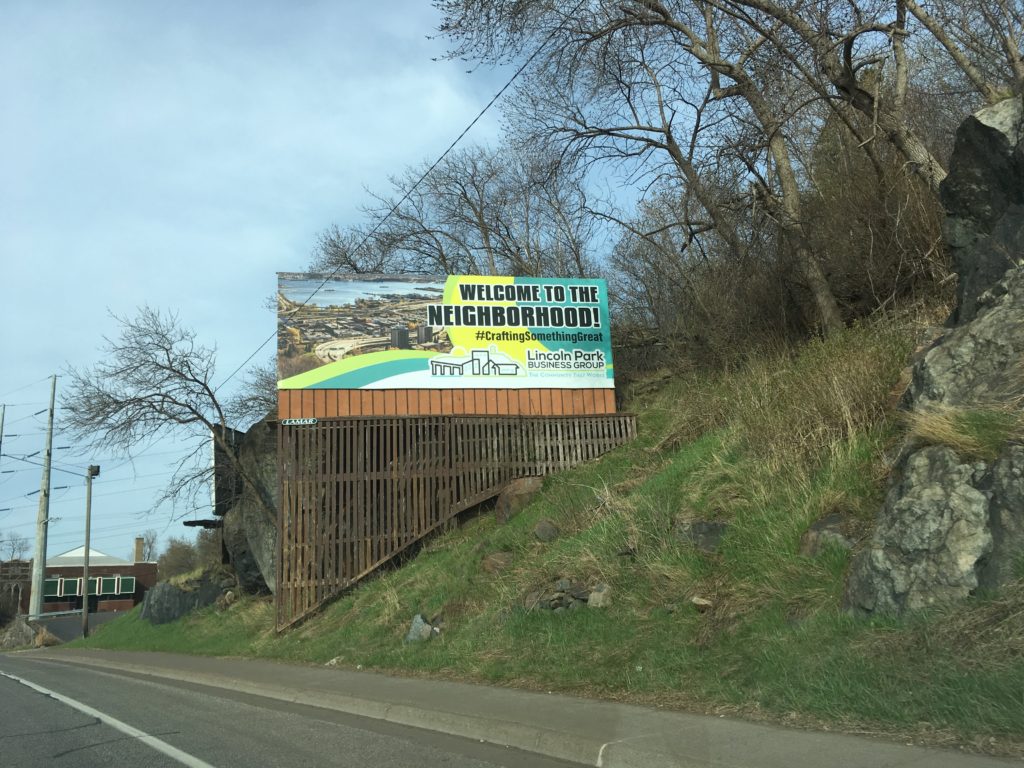 This billboard is at the “Point of Rocks,” a jutting of basalt along Michigan and Superior Streets that divides the east from the west in Duluth.  It welcomes you to Lincoln Park, home of craft beer Bent Paddle Brewing,  waxed heritage bags and packs Frost River, the Duluth Folk School and OMC Smokehouse and Two Loons Gallery and Boutique.

I actually took this photo on Friday, May 11. #craftingsomethinggreat 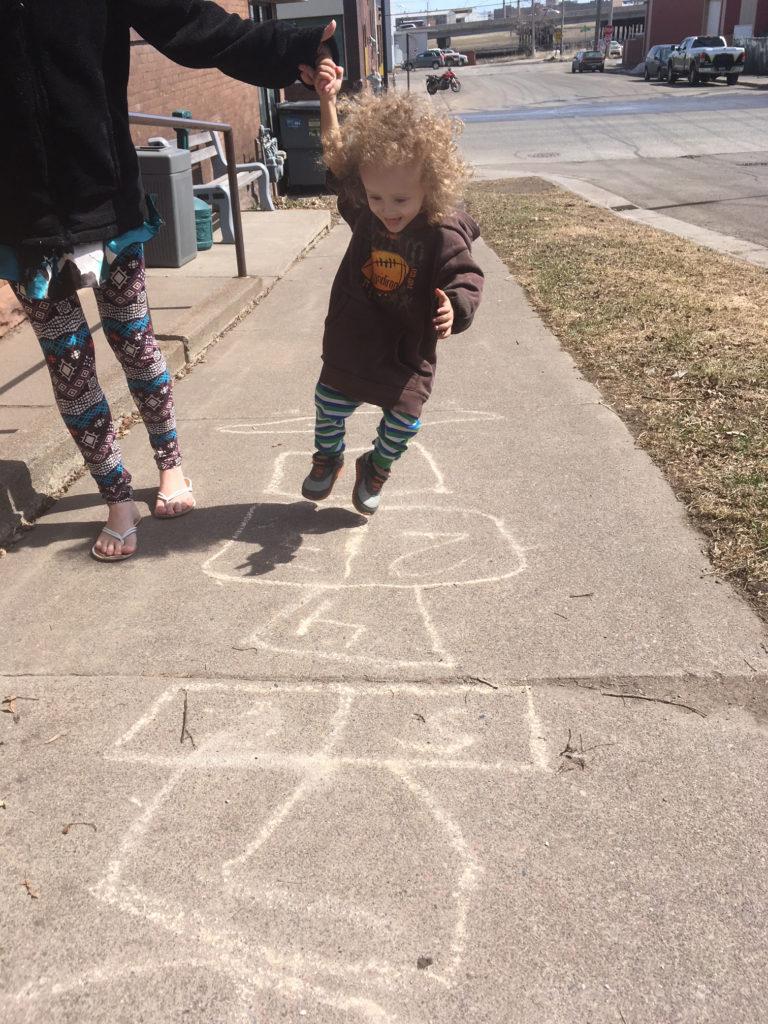 This little boy enjoyed the warm outside weather. His sister made this hopscotch. He doesn’t quite understand hopscotch, but was glad to give it a try for the photographer.His mom says he loves being outside. His mom and his grandmother sat on the front stoops enjoying the sun also. Today was the first day that we had weather warm enough to just hang-out outside. 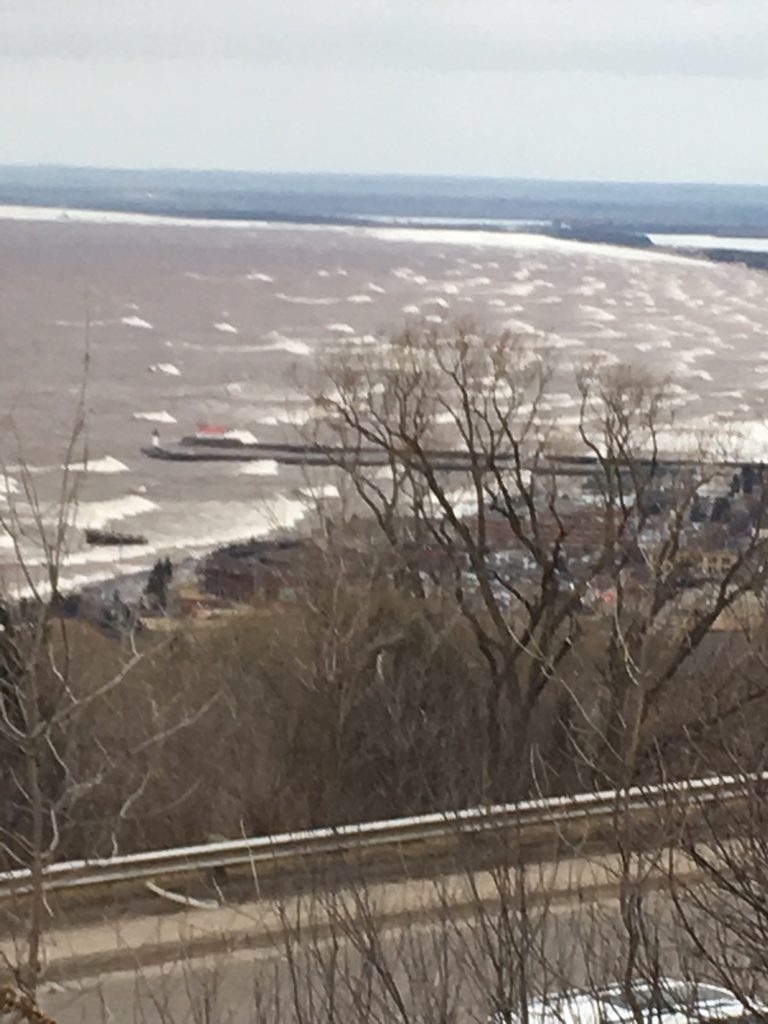 I know technically the above photos isn’t the best photo, but I figured my fans would be disappointed if they didn’t get a look at the our beautiful usually deep blue Lake Superior now colored brown with the whitecaps. The wind blew the cap of my head once, after that I held onto my hat. A blizzard with heavy show is forecasted for Sunday. Minneapolis and South Dakota are getting a blizzard today. We’ll see if Duluth gets a blizzard, but for now, “bundle up and hold on to yer hat!”

Below is the photo that I originally figured I’d use in DDP. I snapped this  a little after 2 p.m. at the Clyde Iron Works Restaurant. It is an old factory, which had been rundown for many years. Now it repurposed as a restaurant and Event Center. Fun Fact: Duluth workers made the steel beams for the Empire State Building at this factory. Read more history here. 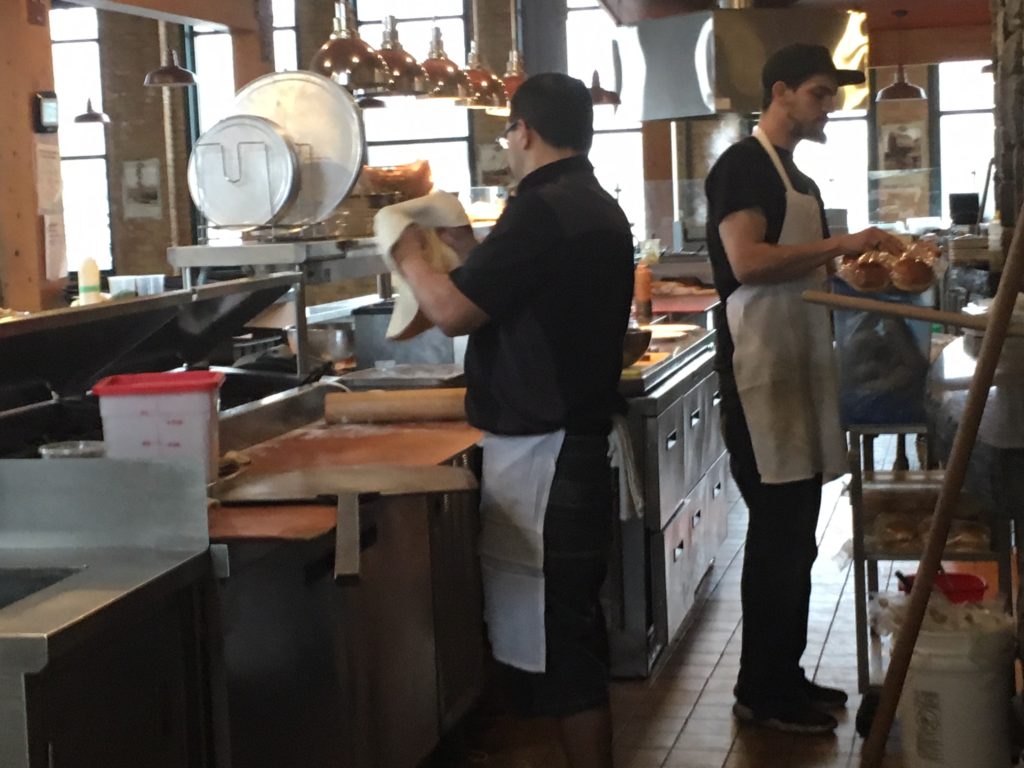 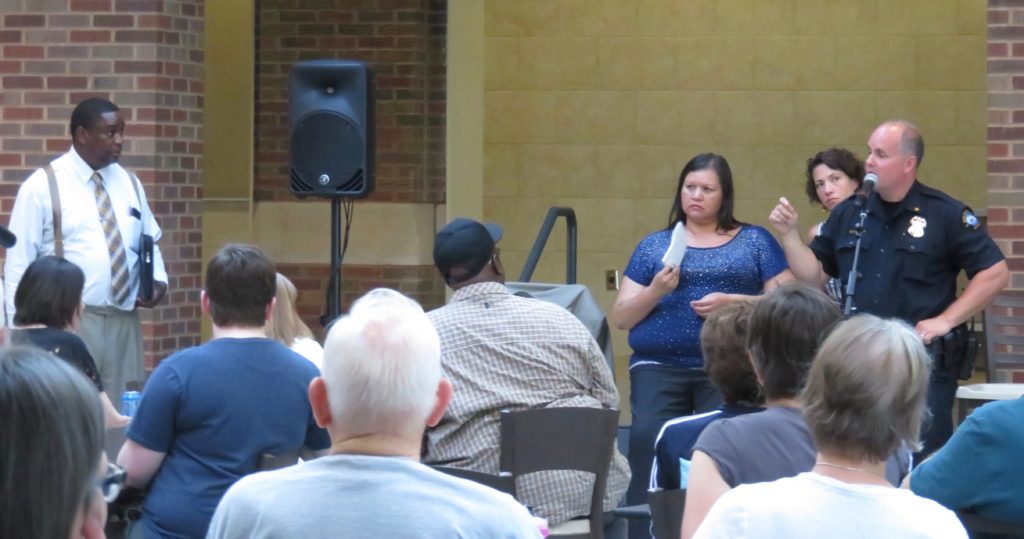 In light of the recent shootings in Minneapolis, Baton Rouge and Dallas and in the spirit of collaboration and transparency a town hall forum was held at Denfeld High School on Tuesday night.  About 60 people gathered at Denfeld High School to learn more about public safety from the Duluth mayor and Duluth’s police, fire department as well as the Citizen’s Review Board. Duluth is one of the few cities in the nation to implement a Citizen’s Review Board.  The Duluth Citizen Review Board is an advisory body to the Police Department and City Council for the purpose of fostering relationships and strengthening trust and communication between the police department and citizens of Duluth to further the best interests of the city and all of its residents.

About 60 people gathered. Microphones were provided to individuals who asked questions. And paper was provided for those to shy to ask in public. Citizens asked questions about the role of police officers in schools, how officers are hired and if racial profiling is used.

“We don’t like to have average officers we do a lot of coaching, guiding and mentoring with our staff,” said Chief Mike Tusken

A view from Lincoln Park High School of the ore docks. Notice the grass growing on the train tracks on the right. I’ve never been at a high enough elevations to see the tops of the tracks. 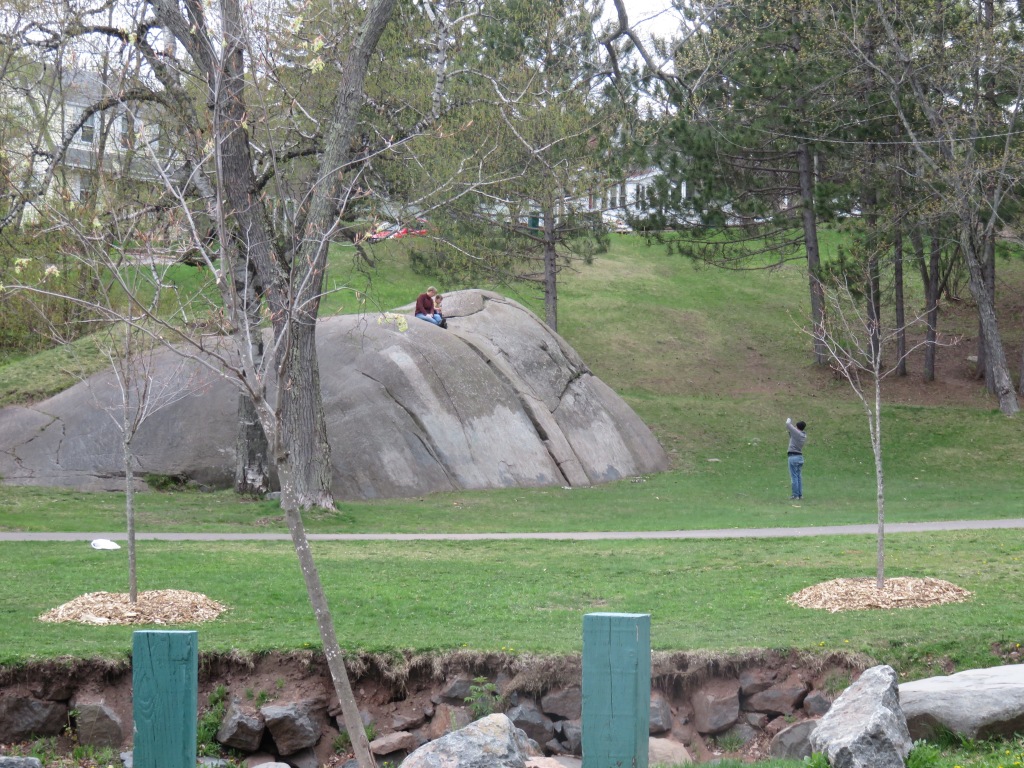 A great place to pose for a photo in Lincoln Park.  Lincoln Park (originally named Garfield Park) is one of the oldest of Duluth parks. Straddling Miller Creek and stretching from 3rd Street up to Skyline Parkway, it encompasses some 35 acres. This might be “Elephant Rock” 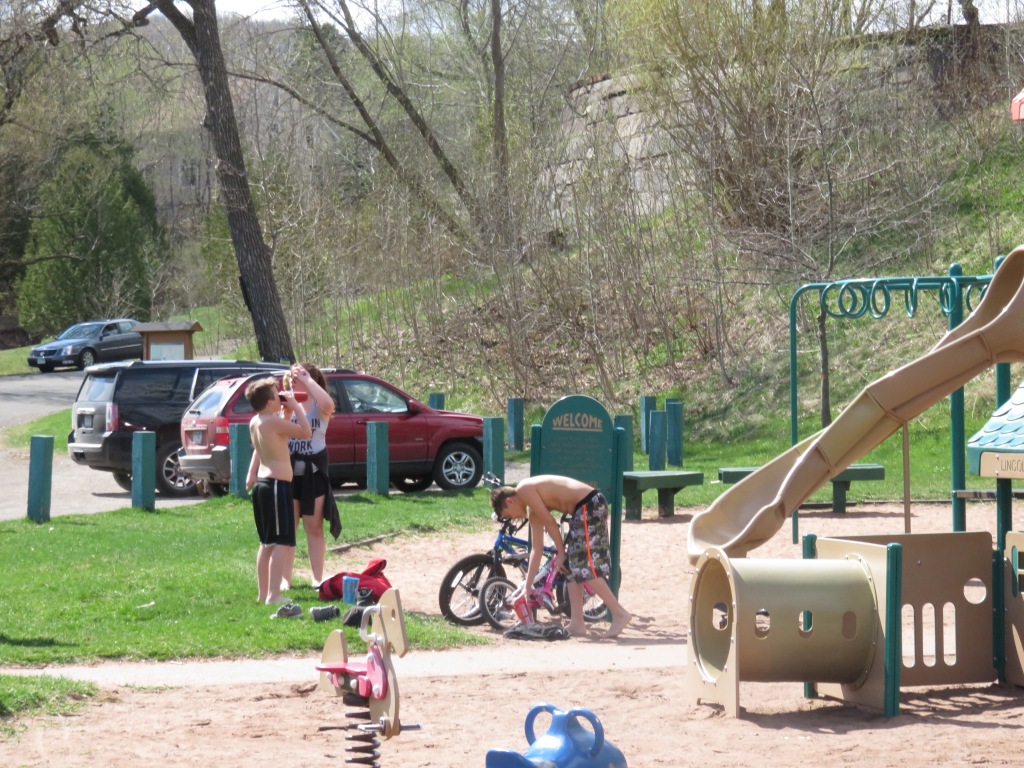 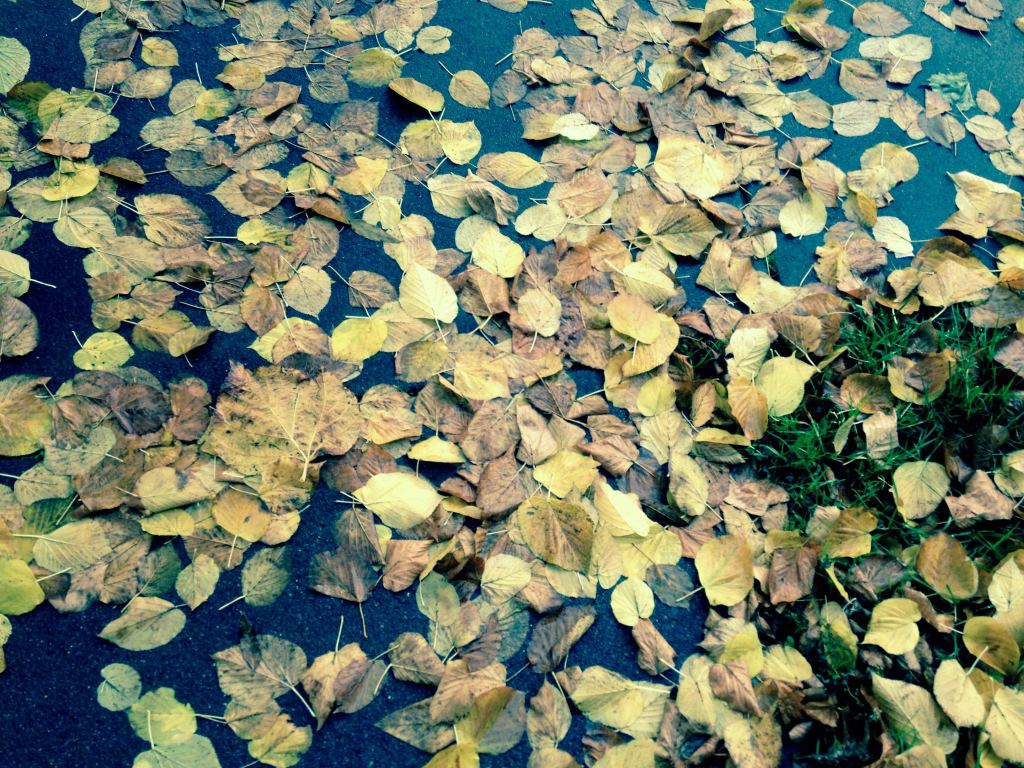 Many times spring is traditionally thought of as the rainy season, but it seems to me it rains a lot in October.