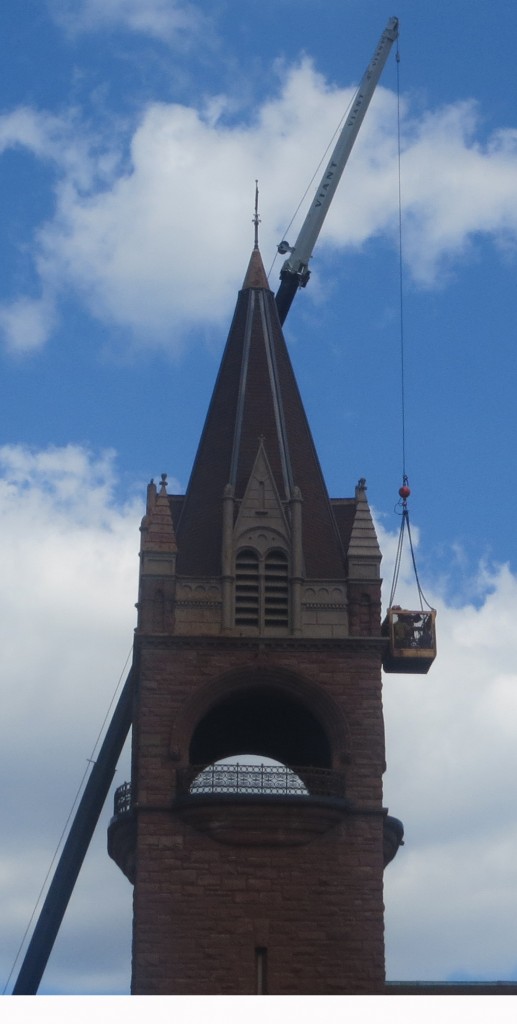 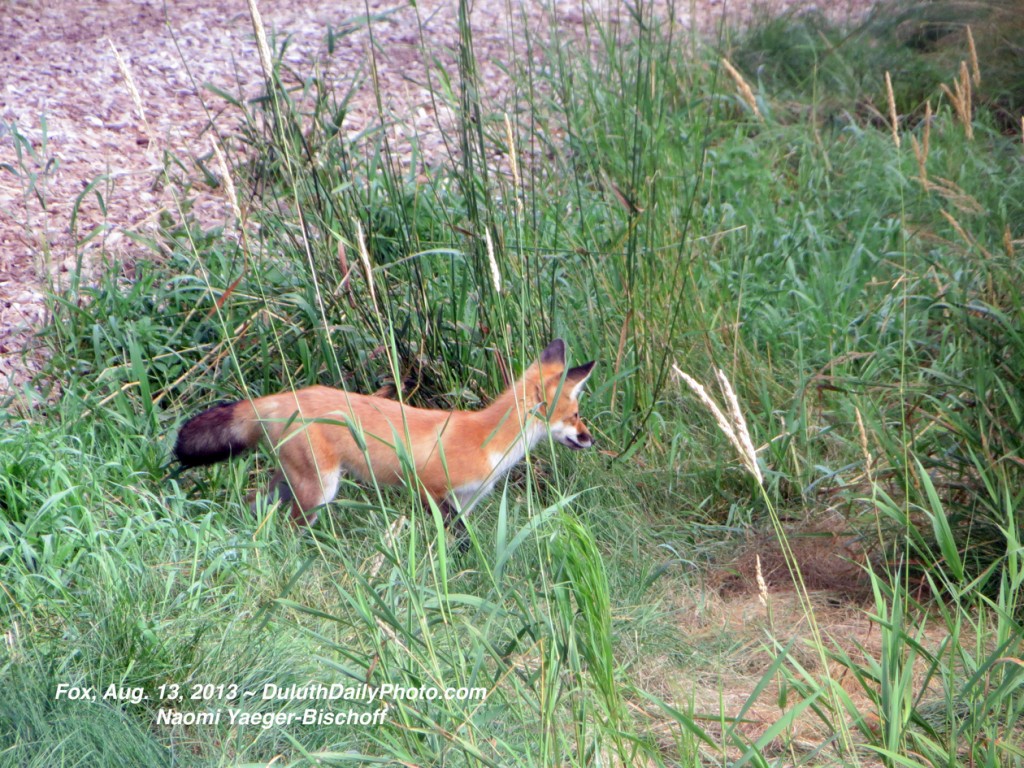 This fox and another fox were walking around the pond at Bagley Nature Center which is across from UMD. The Superior Hiking Trail also goes through here. He seemed not to notice me for a long time.

Once he did notice, he took off running. 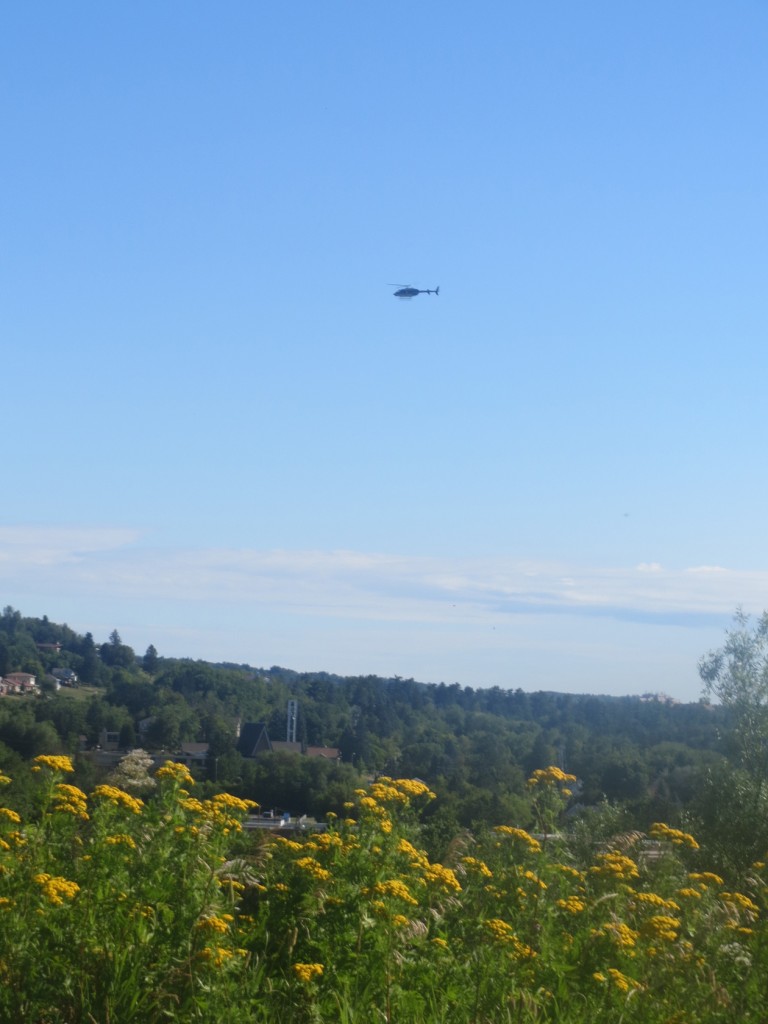 It’s not unusual to see a helicopter over Central or East Hillside. Both St. Luke’s and Essentia Health have helicopters for medical emergencies.

(I always feel sad when I see them because it means someone has been seriously hurt, but I know someone else who sees them as angels.) 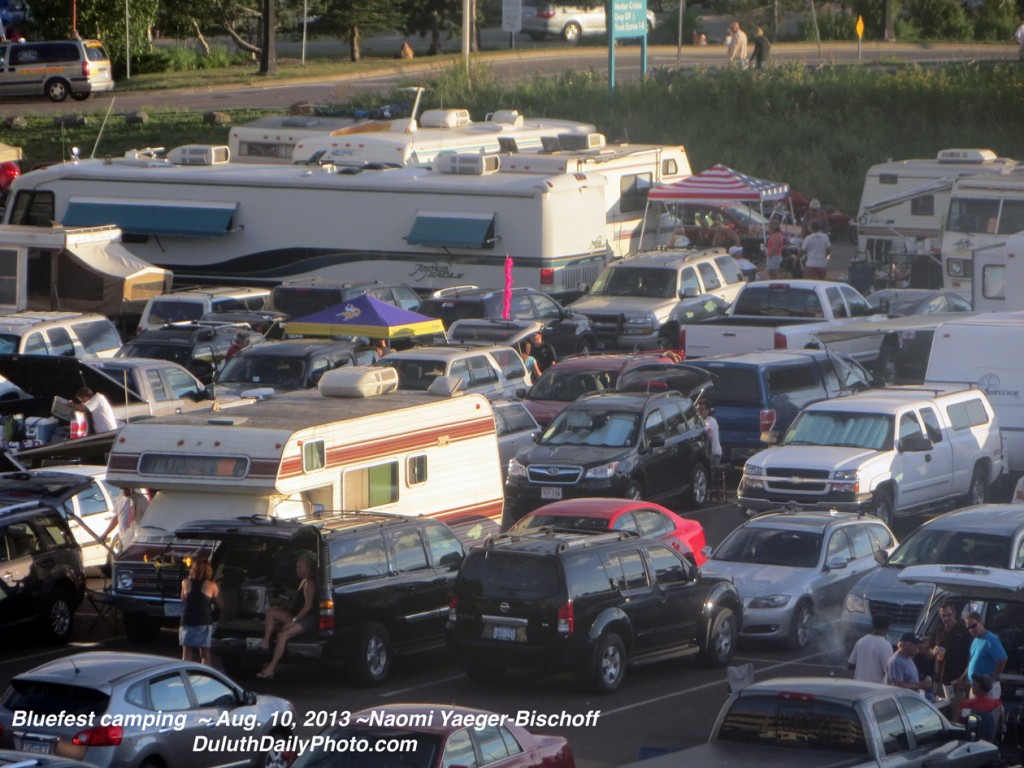 Many people have parked their RVs in the DECC’s parking lot and ramp while attending the Bluesfest.

Here is an interesting story about it.

(I didn’t go to Bluesfest, (I went to northern Wisconsin today, but I can hear it at my home with my windows open and when I was driving up Mesabi Avenue today, I thought I had my radio one, but it was music from Bayfront Park. 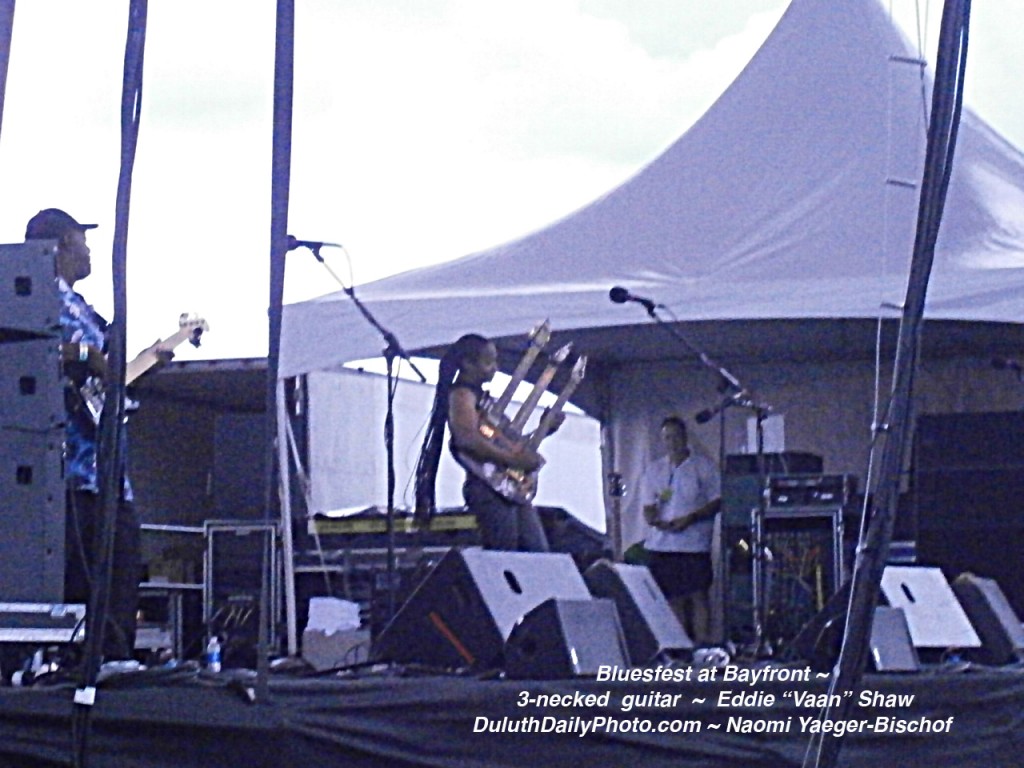 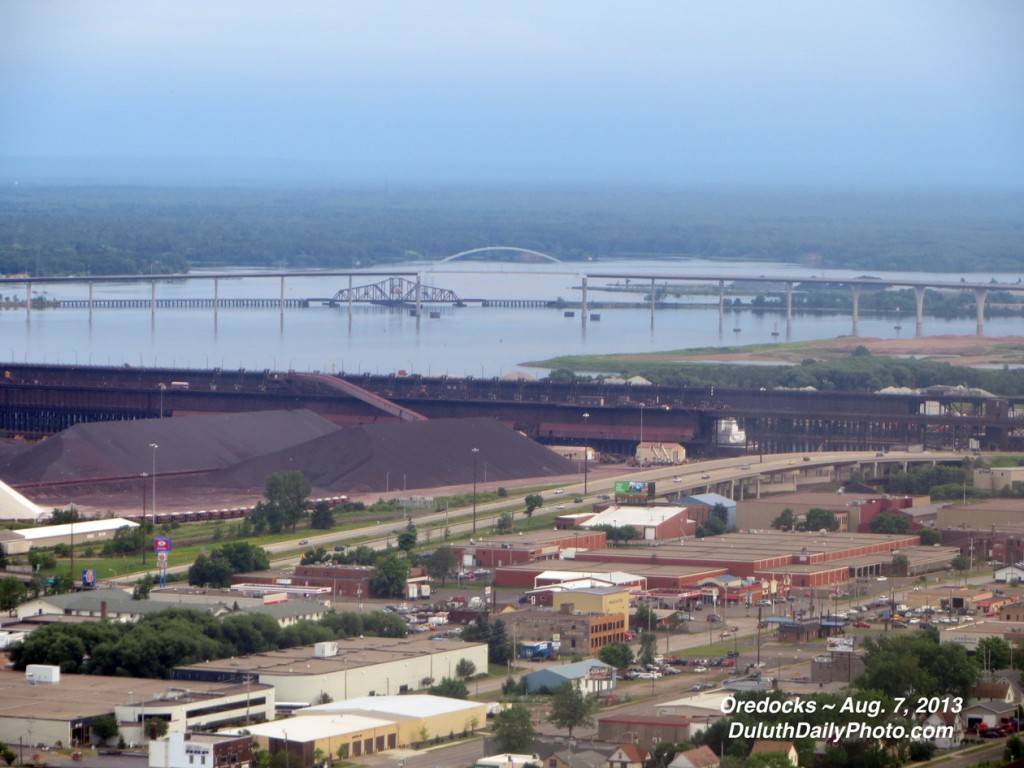 In this photo you can see the Oredocks, taconite pellets and the brick building is the U.S Postal Service Building.The big bridge in the background is the Bong Bridge and the smaller one, is The Grassy Point Bridge, built in 1912 for Burlington Northern Santa Fe Railway 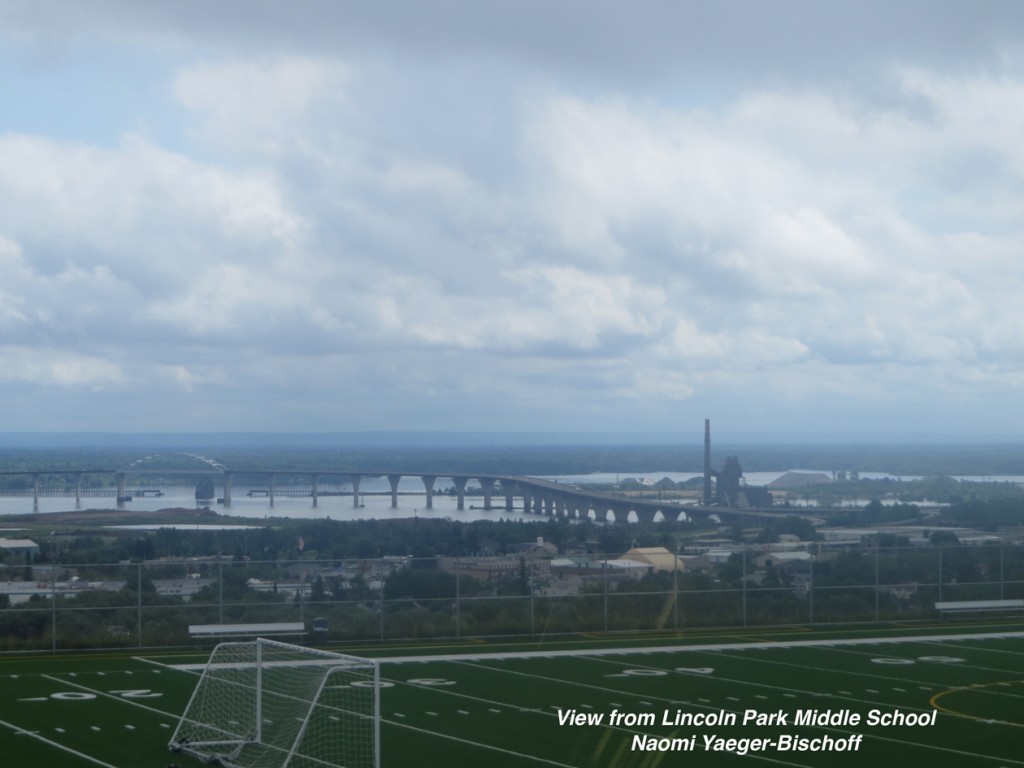 This is the view from the library at the Lincoln Park Middle School is a new school up on the hill. 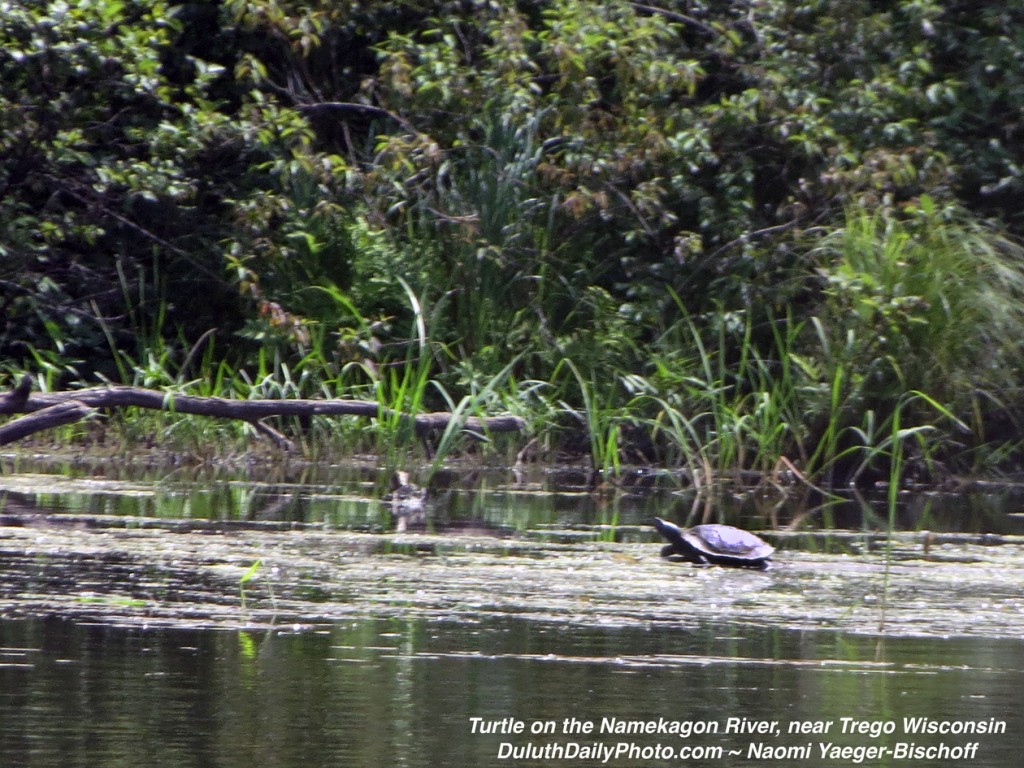 We saw this turtle while canoeing on the Namekagon River.

According to the website Wisconsin Trail Guide: The Namekagon is one of Wisconsin’s premier, flatwater, canoeing and kayaking rivers, and is immensely popular for multi-day trips.

It is about 70 miles south of Duluth.

On this trip we also saw: eagles, deer, fish swimming by our canoe, clams, and the most exciting thing we saw was a black bear!

In 1965 Gaylord Nelson paddled down the beautiful Namekagon River with Senator Walter Mondale, 138 canoeists and tribal members from Lac Courte Oreilles Ojibwe Tribe to help protect the Namekagon from development.Â  In 1968 the beautiful Namekagon and St. Croix Rivers became the first rivers east of the Mississippi to be protected under the Wild and Scenic Rivers Act.

In the spring of 2003 Gaylord Nelson returned to the river banks of the beautiful river he had personally protected while serving as the US Senator from Wisconsin. He was joined by hundreds of supporters, both Indian and non-Indian, who honored him with ceremony, an honor dance and the highest honor in Indian Country, the feather of the sacred eagle.