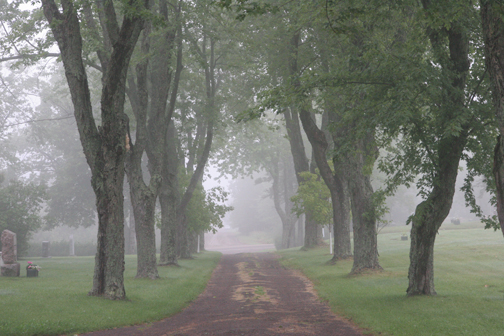 Today was foggy. I took this photo at the Bethany Cemetery in Hermantown

It was the perfect late afternoon for a ceremony on the beach. 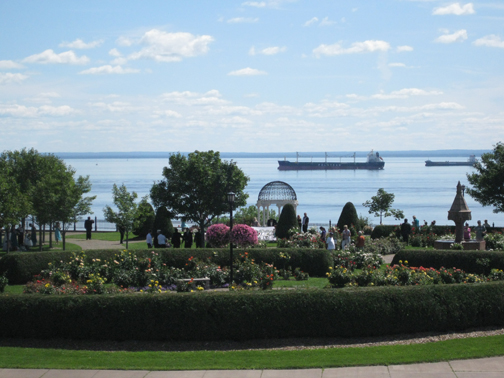 It so much fun to see the Rose Garden at Leif Erikson Park. Today there was wedding. The story of the construction of Interstate 35 and Duluth’s Rose Garden is Interesting. ThisÂ  Website explainsÂ  that what follows is not an ideal example of how to design an urban freeway, but rather a case study of the dynamics of the issue of the urban freeway, its effects on the community, and its design. It is worthy of detail because its history typifies that of the American urban freeway in general, with the shift in attitudes towards freeway construction during the 1960s that led to discord and friction between function-minded highway engineers and civic-minded citizens; it is worthy of detail because of the notable way in which the community resolved the freeway debate by seeing the highway as something which could benefit rather than destroy and unite rather than divide a community; and it is worthy of detail because of its design, which features a combination of aesthetic, mitigation and integration techniques which make it an example of good urban freeway design.

Slowly, the possibilities began to take shape. Instead of building up, why not build the freeway down and cover it with a “lid” atop which could be built a park? The lid would hide the freeway from the urban fabric as well as protect traffic from lake spray. The park, furthermore, could be used to connect downtown Duluth to the waterfront. Thus was the beginning of Lake Place. Similar tunnels could be used to hide the freeway and protect historic buildings such as the Fitger Brewery as well as existing civic spaces such as Leif Erikson park.Read more at 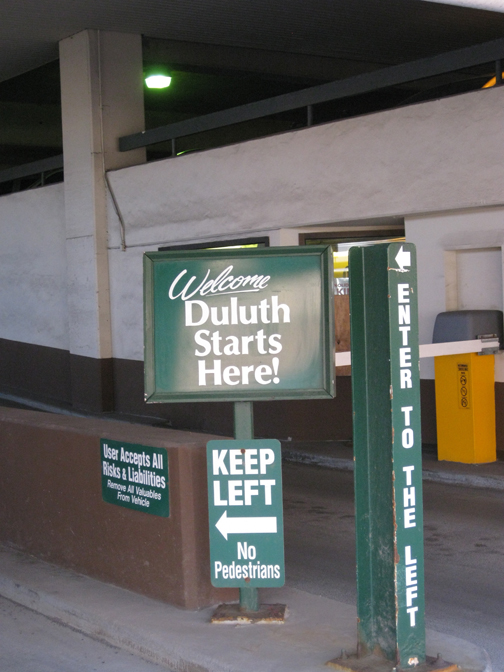 As a resident of Duluth who attends a lot of events and uses this downtown garage, I used to wonder why this sign says, “Duluth starts here.” But now I get it. It’s for the tourists who use the garage as guests at Holiday Inn. 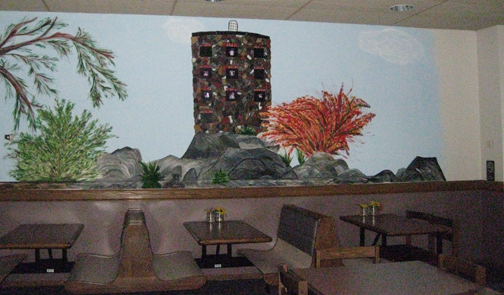 This mural is in the lunchroom at City Hall. 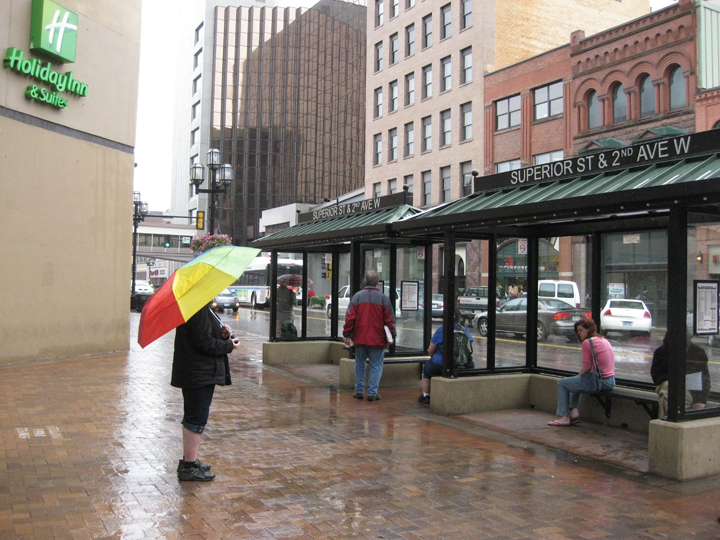 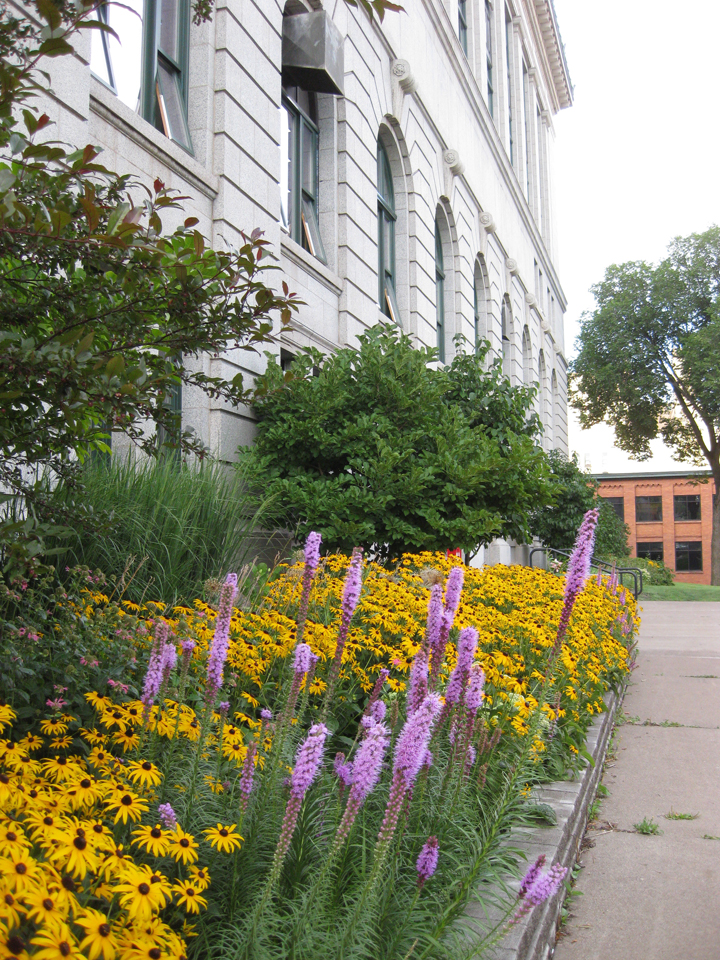 One of the rules of the City Daily Photo Project is: No flowers or cute puppy photos. I really wanted to capture this scene with the flowers in full bloom. I figured if I worked the Duluth City Hall into the photo that it would fulfill the requirement of making the photo specific to Duluth.

Zumba is an exercise fad that has caught on across the nation. Who wants to exercise indoors when they could be outside enjoying the weather and beautiful scenery.Â  It basically a dancing exercise to a Latin beat. Learn more about Zumba here. You can even use that link to see if there is a Zumba class near you. 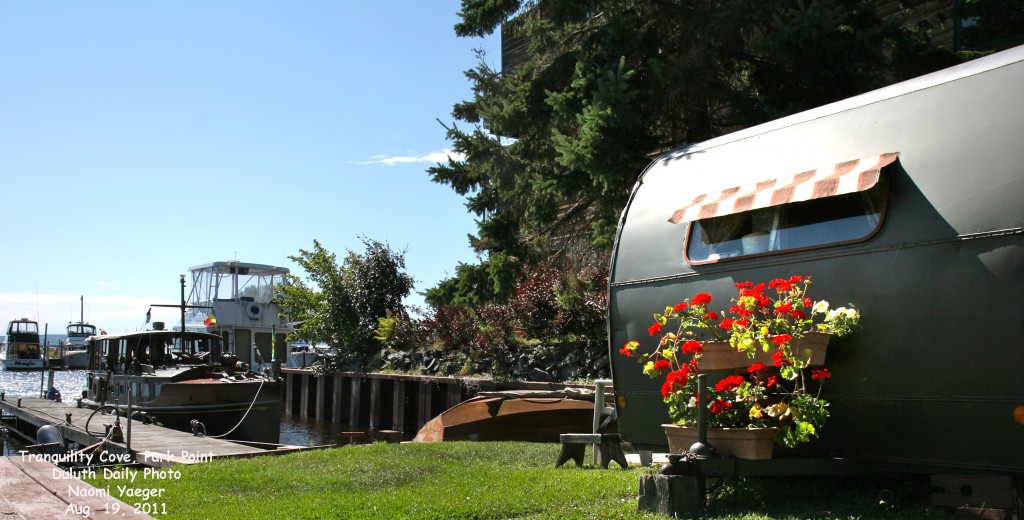 While on Park Point I stopped to take in this quaint little scene. It’s a marina named Tranquility Cove and is located at 1426 Minnesota Ave. The little trailer which is painted black is the office. I like the red geraniums on the hitch.

Flying over the head of Lake Superior we see Minnesota Point with the industrial slips behind the point and the Blatnik or “High” Bridge connecting the industrial area to Superior Wisconsin. In the background is the second bridge, the Bong Bridge; behind that is the St. Louis River.