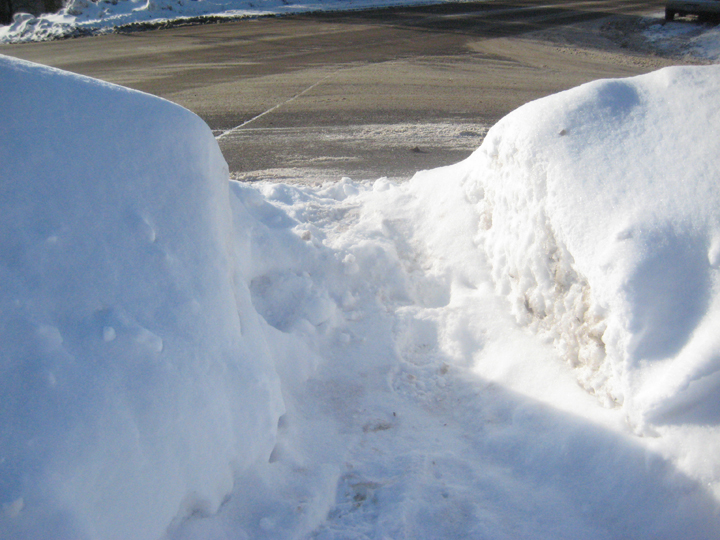 This crosswalk is better than most, but not perfect. 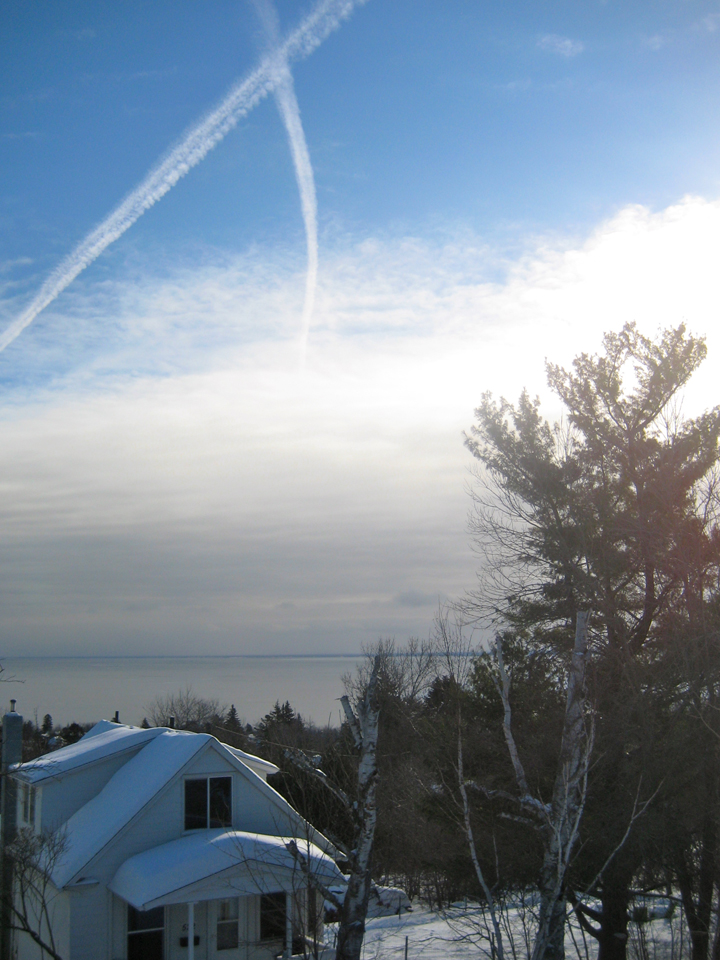 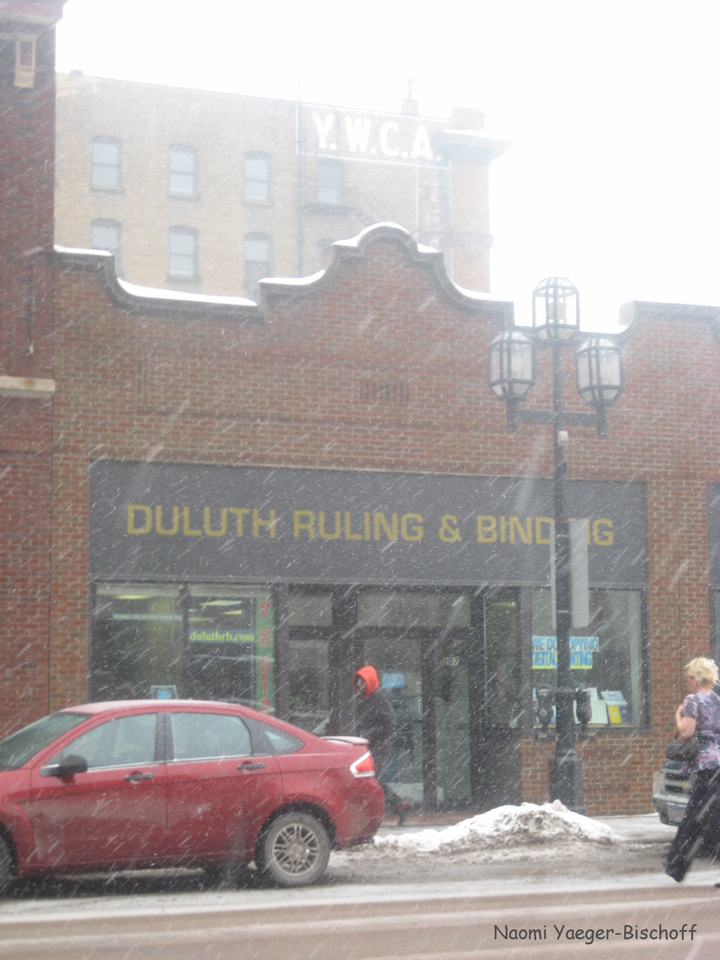 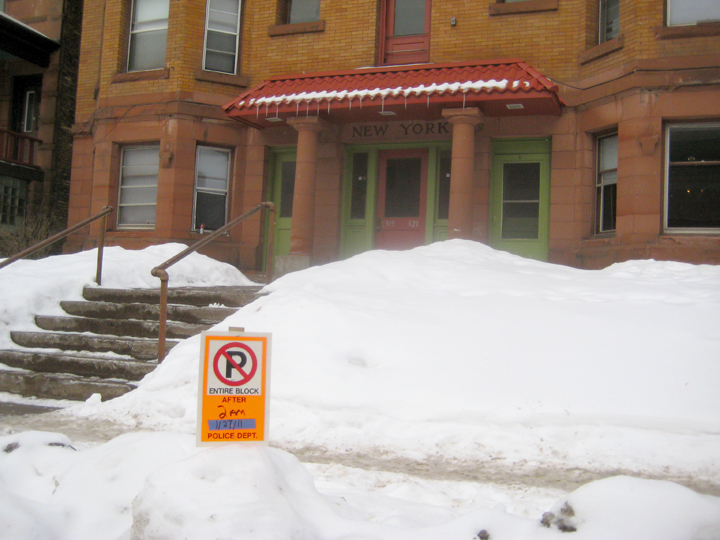 City workers were out clearing the snow from the streets. 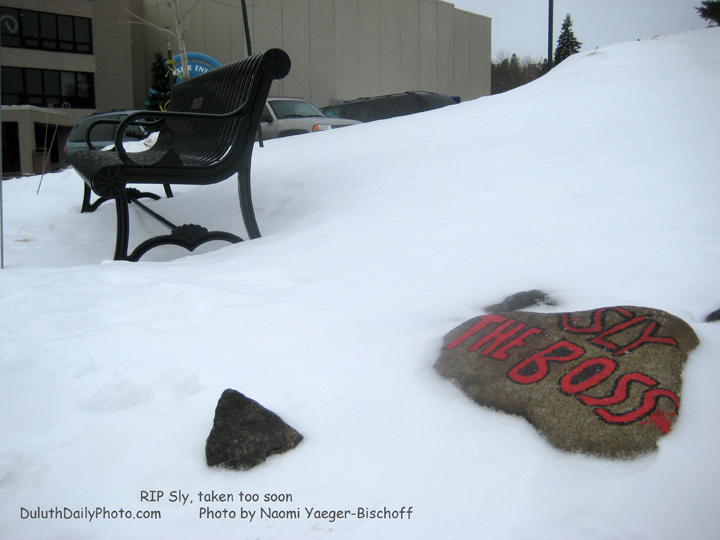 Today I was exploring the area behind Perkins on London Road near the Edgewater Motel. My plans were to take a photo of the sidewalk that overpasses Interstate 35.Â  As I got closer to the entrance of the overpass I noticed a newÂ  bench and a stone painted with red letters. It read: SLY THE BOSS.

I remember when this young man went missing last January. The bench was put into place on August 16, 2010 to honor Sly’s birthday. He disappeared after going to a party at Stargate in Superior. His body was found in Lake Superior in June. Here is his obituary.

He was outstanding from the beginning. 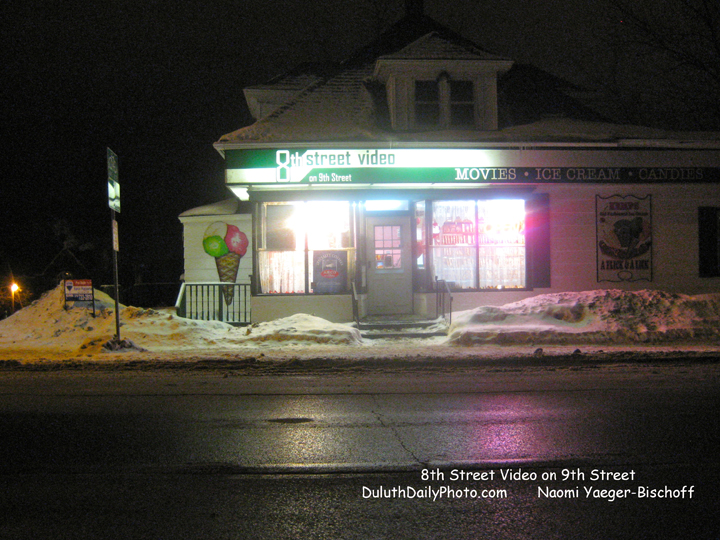 This local icon is for sale. Does anyone know the story of why it is named 8th Street Video on 9th Street?Â  Or why they are selling? 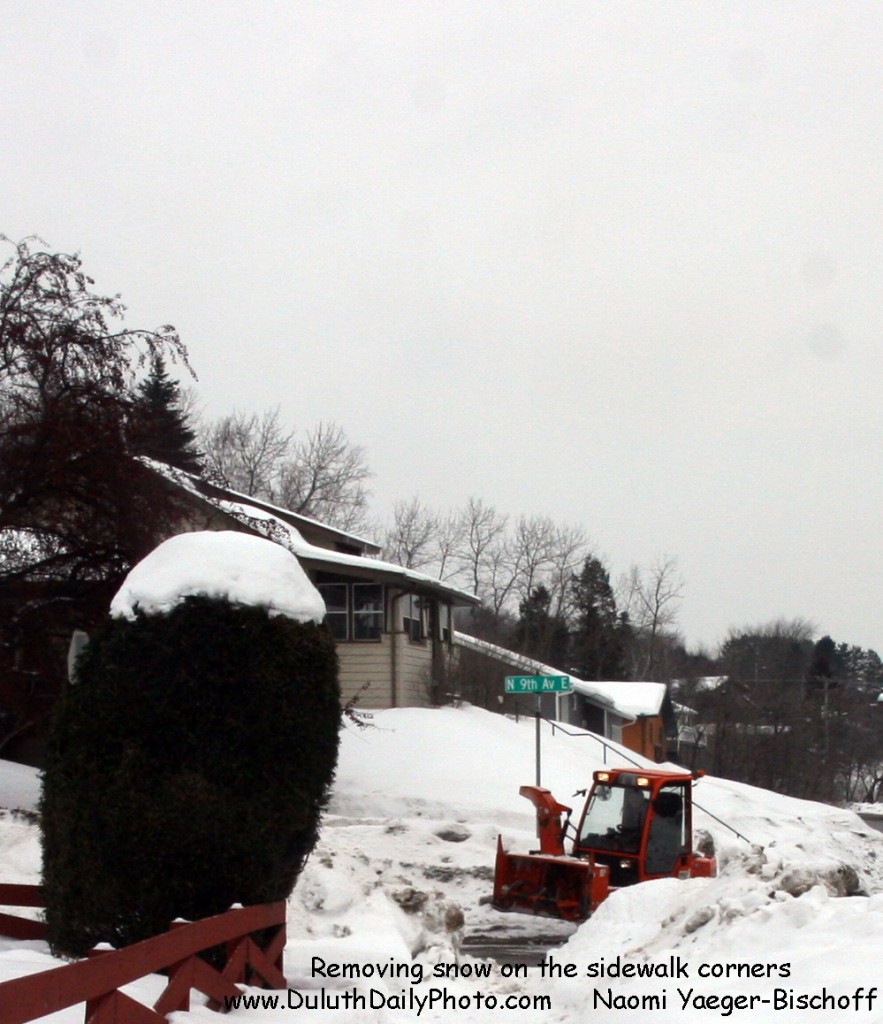 Sometimes our snow turns to ice around the edges of the sidewalks. It gets especially hard to get over the hurdles of snow when the city plows come by. Today this little plow was opening up the sections of the sidewalks at the crosswalks. They had gotten hard and impassable.

Today was a blustery, but warmer day. Temps ranged from 11 to 17. The sky was white and including flurries. 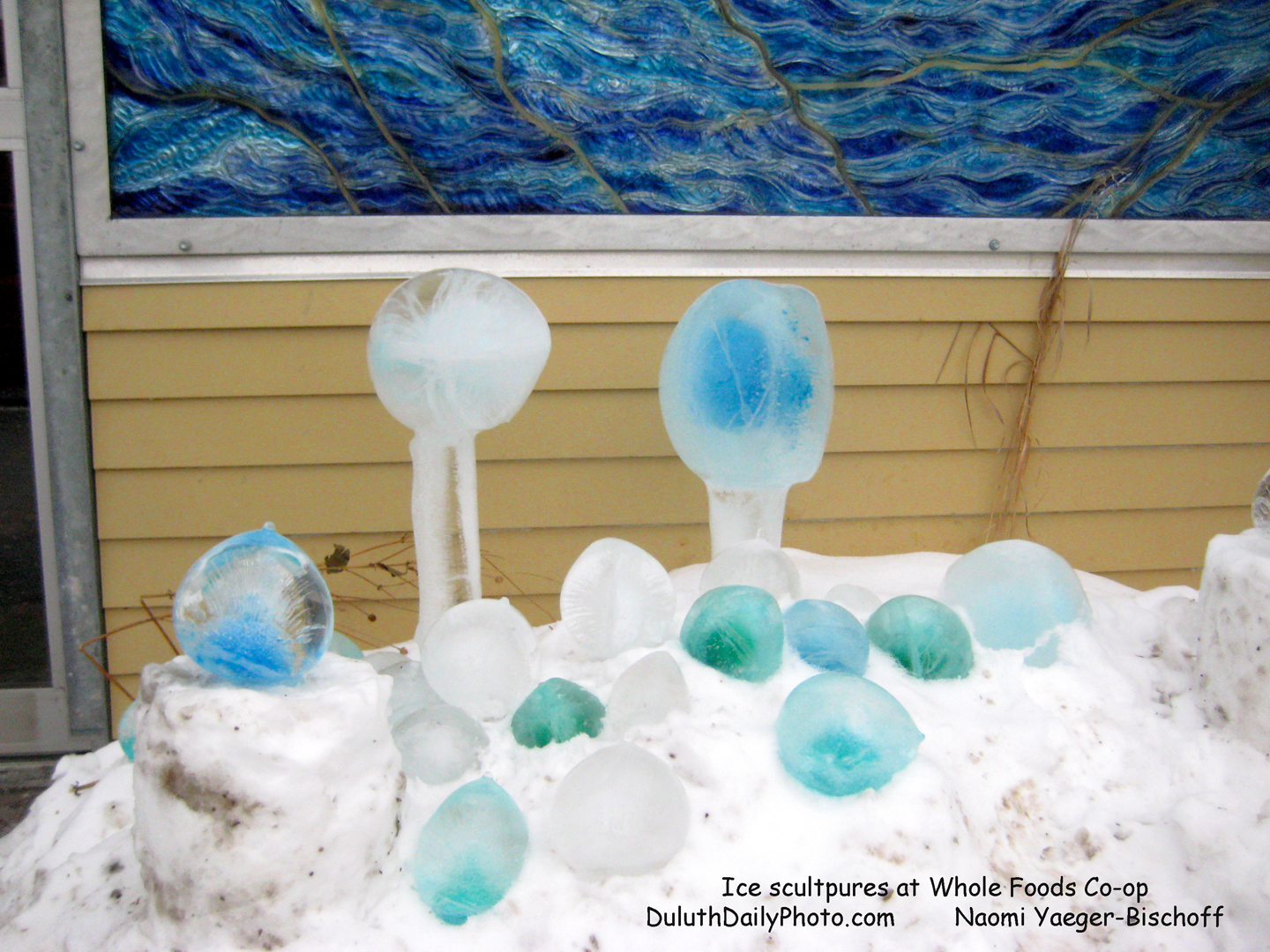 These round white, clear and bluish-green balls of ice are outside of the door of Whole Food Co-op on East. Fourth Street.Â  They are the creation of Walter Sipola, according to Shannon Szymkowiak, marketing manager of Whole Foods Co-op. 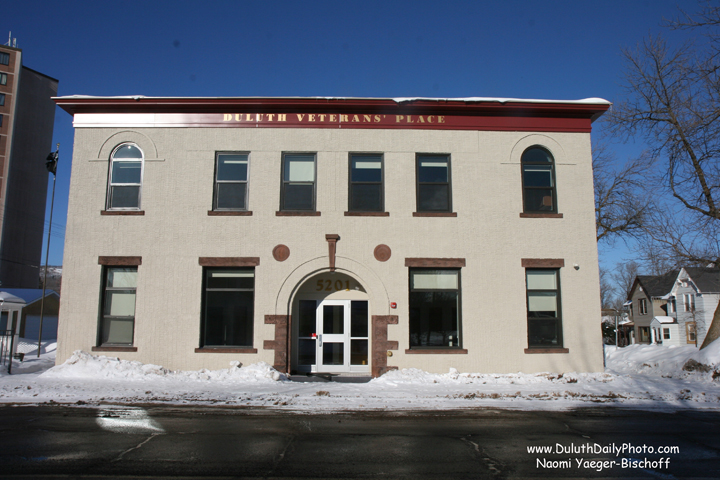 The Minnesota Assistance Council for Veterans (MACV) recently remodeled this apartment building at 5201 Ramsey Street. It has 12 apartments. The purpose of this building and another building on this block is to assist veterans in securing permanent housing. There is also space for other support services for the veterans to successfully transition to permanent housing. Not only does this building help homeless vets, the fix-up revitalized the neighborhood.

From the National Coalition for Homeless Veterans: VA estimates that 107,000 veterans are homeless on any given night. Over the course of a year, approximately twice that many experience homelessness. Only eight percent of the general population can claim veteran status, but nearly one-fifth of the homeless population are veterans. 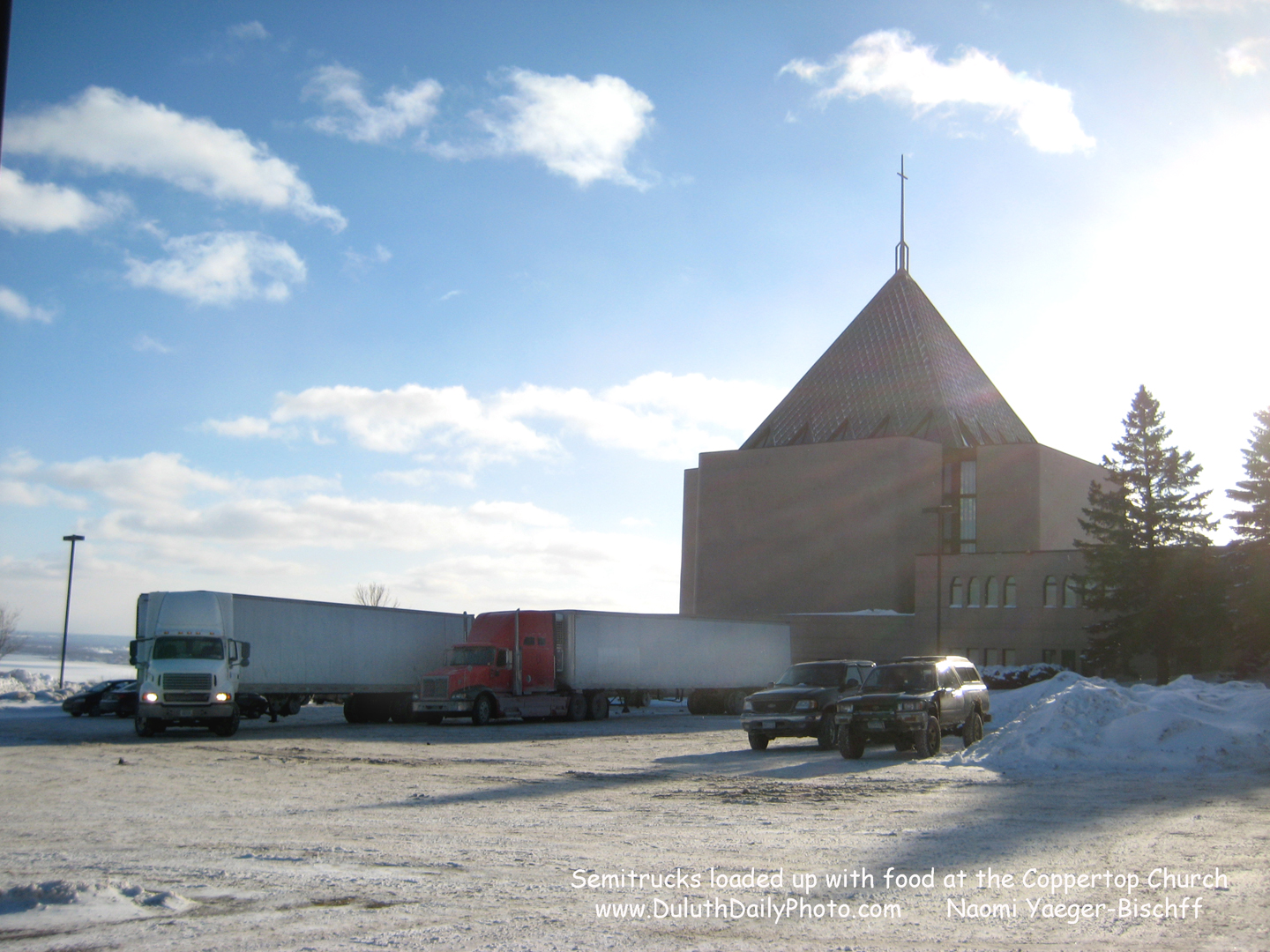 Today as I was running errands I got behind a semi-truck. I don’t really enjoy following big trucks because they limit my ability to see. I drove down Central Entrance and then the truck turned left, right were I was going to turn near the Coppertop Church. Then it turned into the parking-lot at the Coppertop Church. This time instead of wanting to get away from the truck, I wanted to see what in the world a semi-truck was doing at a church. Turns out there was already another semi-truck in the parking lot. “Oh yeah,” I thought, “How could I forget?” They were delivering food for Ruby’s Pantry.

Ruby’s Pantry is a special program where anyone can bring a basket, box or some type of container an pay only $15.00 to get well over $100.00 of surplus food.