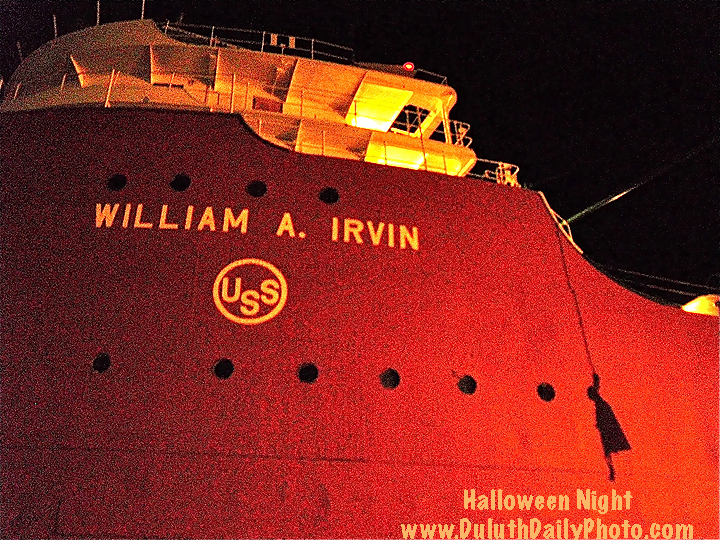 The William A. Irvin is a retired U.S. Steel laker. In the month of October the ship is a haunted ship complete with tours starting in the engine room and continuing through the whole ship. Read about it here. 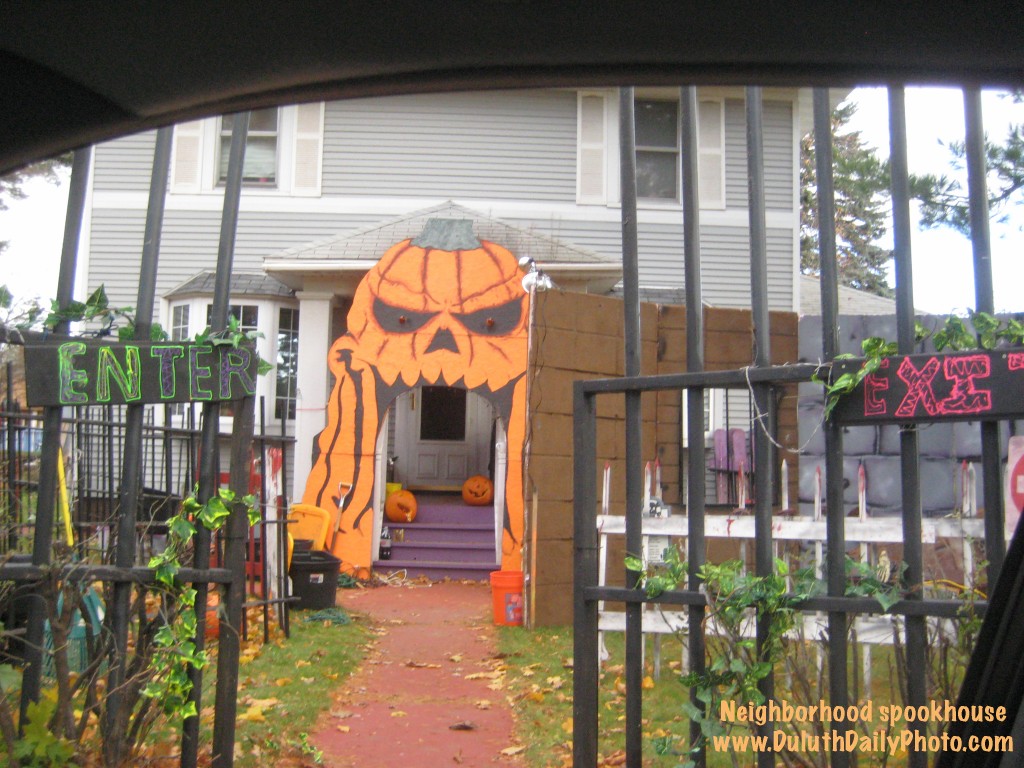 It looks like someone on Grandview Avenue in the Chester Park Neighborhood is going all out for Halloween. When I first drove by the front yard, I thought they were building a fence. It looks like some sort of maze. 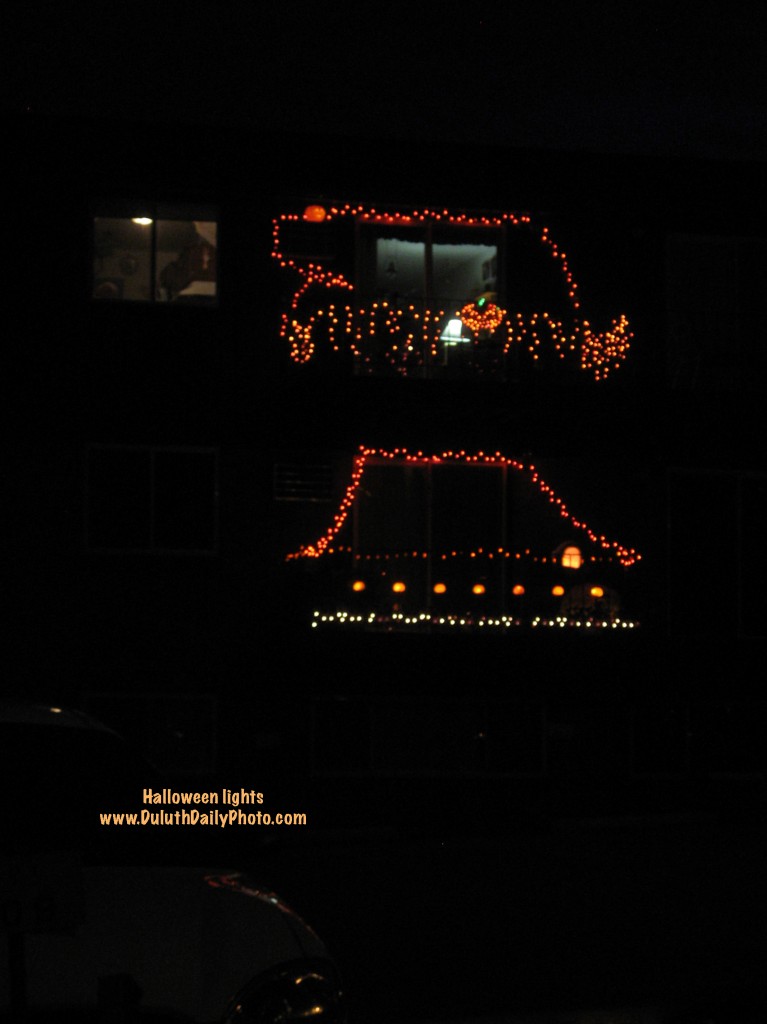 Some people decorate their places with Halloween lights. This is a couple balconies of an apartment building on Kenwood Avenue.Â  A few minutes earlier I had been driving on Arrowhead Road and I saw house with many, many lit up Halloween decorations in their yard. I tried to drive around the block to get back to it, but because of the traffic, it was almost impossible.

What do you think about Halloween decorations. I like the cute ones. The scary ones kind of creep me out. 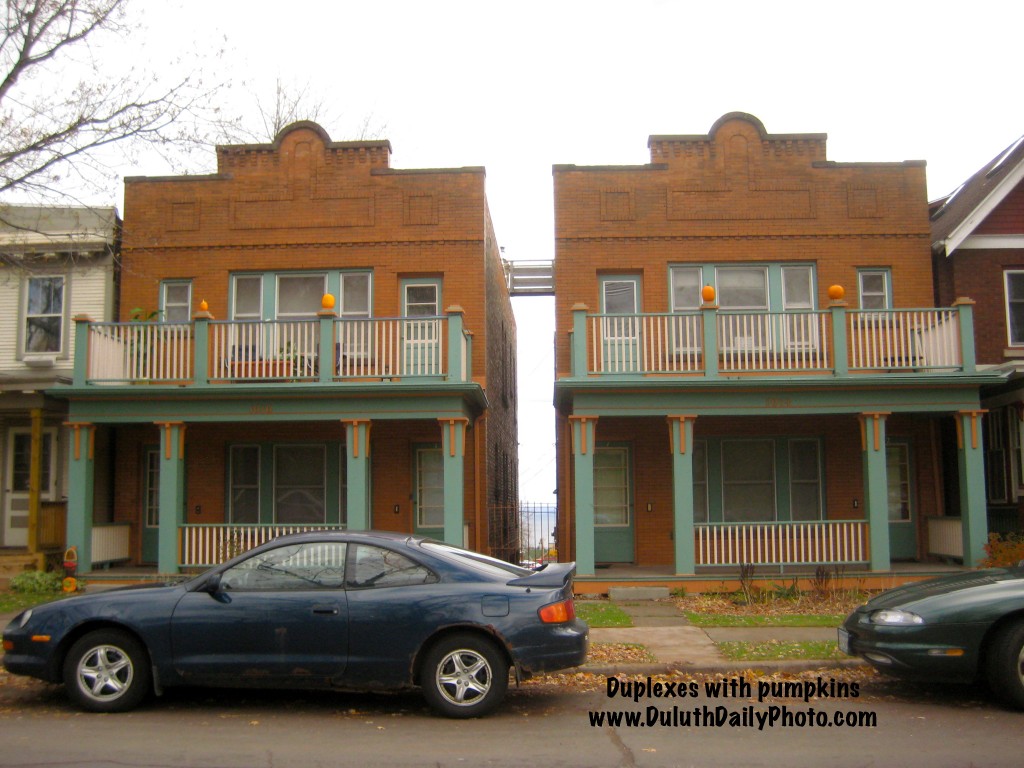 Today I noticed these pumpkins on the second floor porches of these mirror image duplexes across from Portland Square. I wonder if the people living in these duplexes get a long really well and if they got together and planed this,Â  or did the owner suggest they do it? I really like the way people fixed up their houses and duplexes around Portland Square. You may see one of my summertime posts of Portland Square here.

You may see many photos of the houses surrounding Portland Square and also some in East Hillside, taken by Dayna Landgrebe, here. 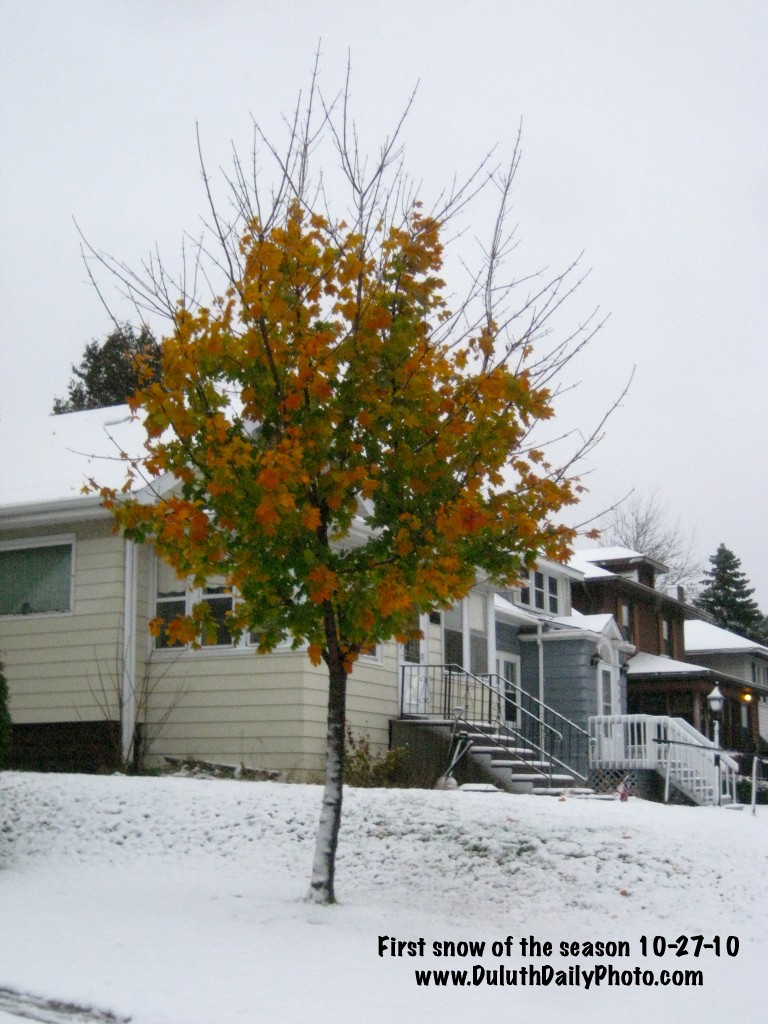 Last night the wind howled and it rained with threats of snow.Â  I didn’t want to be out on the road when it finally did freeze. When I woke up there was snow on the ground. Duluth Public Schools were canceled. I made sure there was a shovel in my car, along with a cap and mittens and an ice scraper.

According to the Duluth News Tribune Weather Blog:

The Minnesota State Climatology Office reported this morning that â€œit appears that the minumum pressure â€¦ measured at Bigfork is the new record low pressure for a non-tropical storm in the Continental US (excluding tornadoes).â€ For comparison, they also noted that the lowest pressure recorded in the Edmund Fitzgerald Storm was 28.95 inches, and the lowest pressure record in the Armistice Day Storm was 28.55 inches.

This storm also set local records for low pressure at Duluth and International Falls, and a new Wisconsin state record set at Superior, which recorded a reading of 961.3 millibars, or 28.39 inches of mercury, at 11:15 a.m. Tuesday.

In general, the lower the pressure, the stronger the storm. A reading of 960 millibars is comparable to a Category 2 or 3 hurricane, although differences between storms up here and storms in the tropics mean we donâ€™t see winds as strong as in hurricanes. 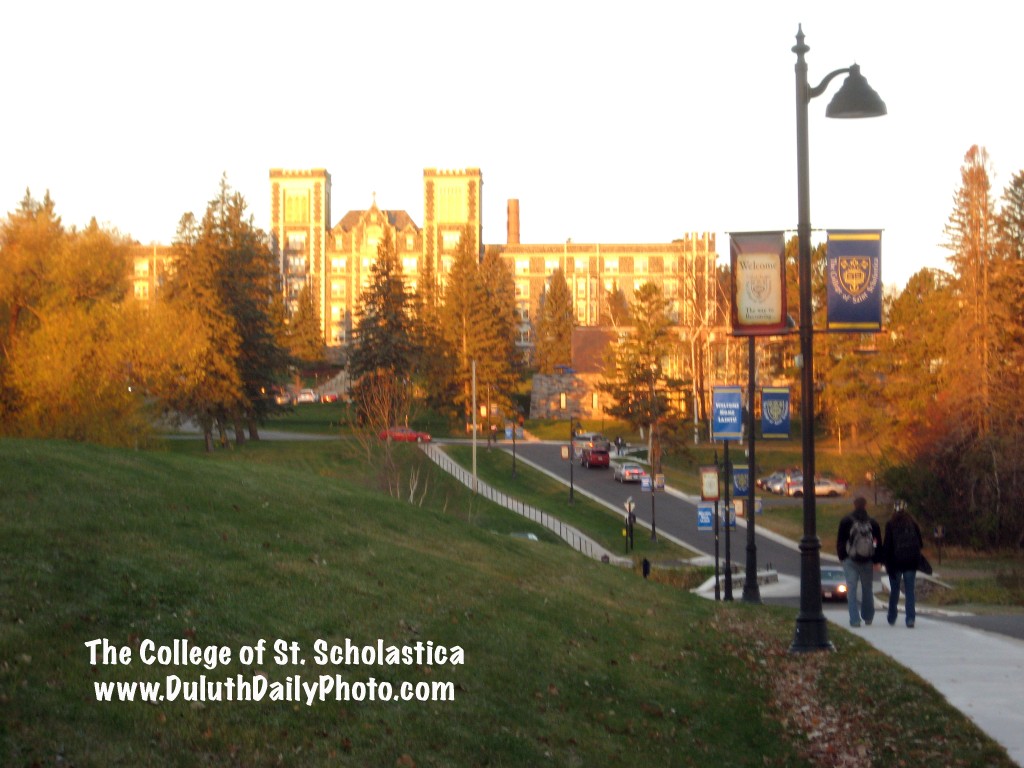 These ribbons adorned the railing of the Sacred Heart for a funeral on a rainy Sunday afternoon.

Sacred Heart is now a music center, it had once been a Catholic Church

On Sunday there was a memorial service for Cathryn Curley, co founder of Safe Haven Shelter for Battered Women. 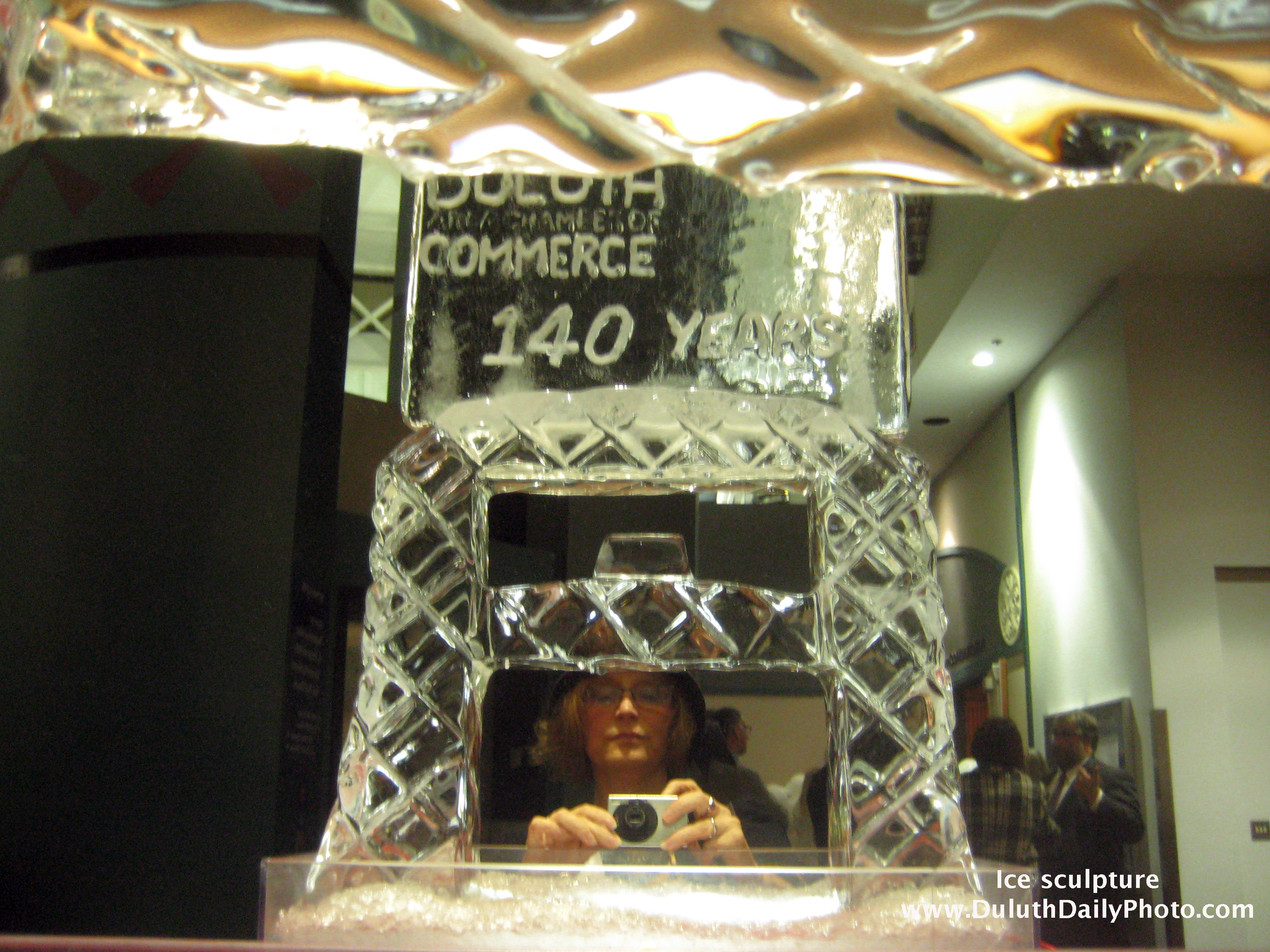 The Duluth Area Chamber of Commerce celebrated 140 years at it annual dinner tonight.

I was about 15 miles from Duluth near Esko, Minnesota when I took this photo. I like the way the sun shined on the cover wagon and the letter, andÂ  I liked the moon in the background. Learn more about the River Ranch Arena Do you see the moon on the upper left hand side? 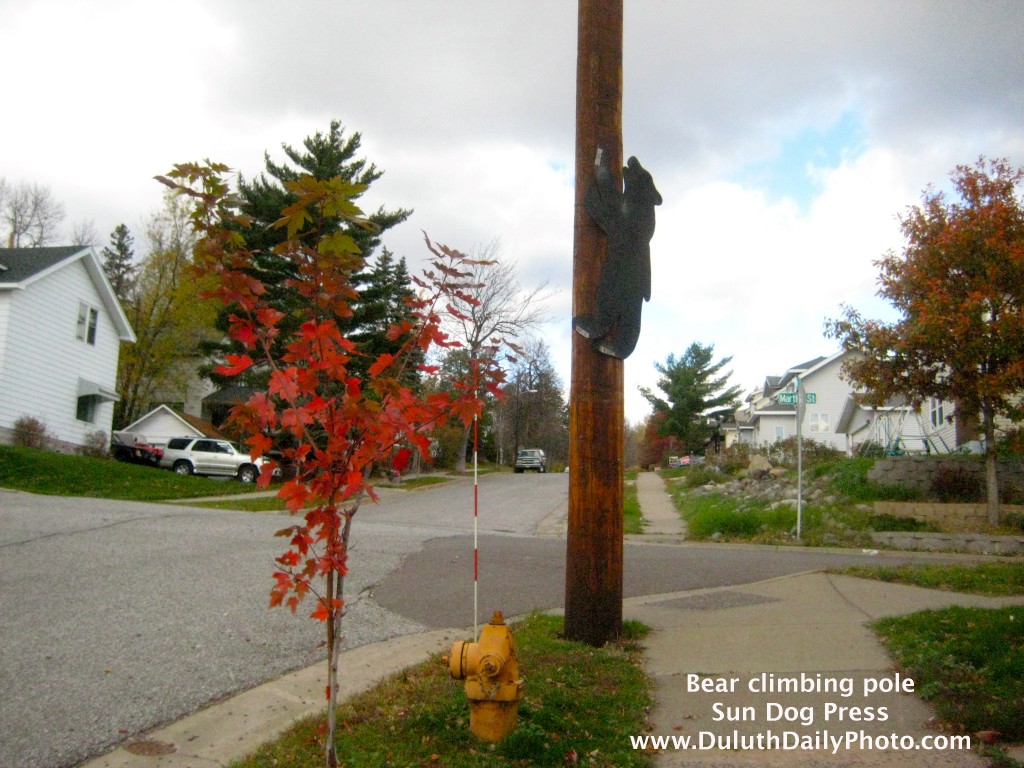 Bears do venture into Duluth.Â  Well maybe they don’t even need to venture in as the live here. See Tony Roger’s post from a couple years ago to see some real, live bears here.