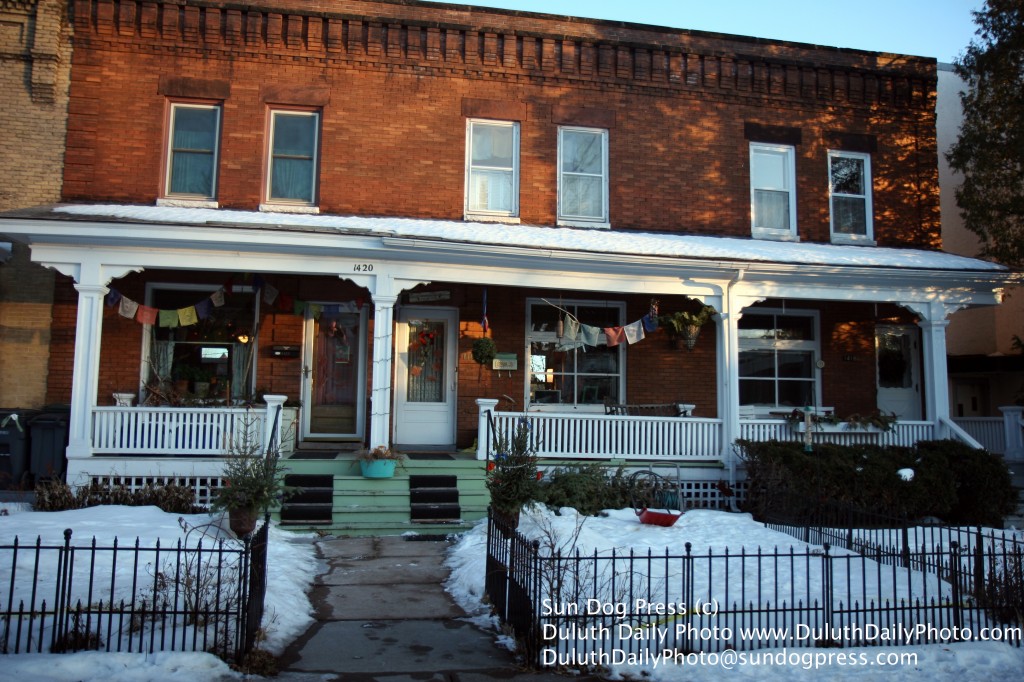 The main reason I took this photos was to show you that it is still light outside and it is after 5 p.m.! I think it was about 5:30 when I took this photo.Â  I also wanted to show that the snow is melting. This is a group of townhouses on 1400 block of First Street in East Hillside/Chester Park. I like the prayer flags hanging on the porch. The townhouse on the end happens to be for sale by Edina Reality. You can see more about it here. There is a open house on Sunday, Feb. 28.

Today we had ALMOST 11 hours of sunlight:

It was really quiet this morning as I was walking, then I heard a noise. I couldn’t figure out who it could be as there was no one around. Turned out it was the cracking and falling of ice in this downspout.Â  I guess this would be an ice dam. Lots of people have had problems with them this season. Here is a link on ice dams.

The weather was fairly mild today.Â  I ran out without my mittens, but it was okay.Â  After nightfall my fingers got a little cold on the steering wheel.

Our weather has been a little more like March weather than February weather.Â  March is typically a dirty snow month.Â  We have had some melting earlier, but now the cold has become a little more biting.Â  Somebody lost their glove here. There are no fingers left in the glove.Â  Gloves and shoes are items one often finds when walking around East and Central Hillside.

This photo is a little deceiving. There is a parking lot up over the hill and the snow has been pushed over the edge.Â  This was taken on Miller Hill on Joshusa Avenue.

Do you suppose there is a story behind the pink and blue houses?Â  One theory is that the same person owns both of them and painted one pink in honor of a granddaughter and one blue in honor of a grandson. These houses are on Sixth Avenue East, which is the umbilical cord from “Over the Hill” to East Hillside, Central Hillside andÂ downtown.

Sorry that I have gotten behind on my posting.Â  I actually took this photo late Monday night.Â  I have been busy because I am developing a 2011 calendar.Â I will name it Everyday Duluth 2011. I hope to market it in retail stores.

I liked the way the morning sun shone on this porch and especially the gold and black sign which reads, “Shelia’s Place.” I had heard that the building was named after the late Shelia Wellstone, wife of the late Sen. Paul Wellstone. Shelia Wellstone focused much of her work on domestic violence, assisting survivors and pursuing policies to support its prevention.Shelia’s Place is part of the Women’s Community Development Organization (WCDO, formerly Women’s Transitional Housing Coalition, Inc.)

The mission of WCDO is to create an environment that strengthens a woman’s belief in her ability to influence the direction of her life; and to To develop a range of long-term, safe, affordable housing options for and with low-income women.

I see from the website that Sheila Miller is the Shelia’s Place advocate. I think that that is just a coincidence that they have the same name.

A woman stands on a bridge in a park near the Central Hillside Community Center. Isn’t this exactly what the funders [Duluth LISC] were hoping… people to interact with the art?

About the Ice Sculpture

The construction of a new arena at the DECC, [Duluth Entertainment and Convention Center] is taking shape. It will provide bigger and better venue for UMD’s hockey players. I hate to see the skyline change, but I suppose most are excited by this new arena. It will seat 6,000 for hockey games and up 9,500 to for concerts and major entertainers. Construction began on April 13, 2009 and it is scheduled to be complete by December in time to open with a Menâ€™s UMD hockey game on Thursday, December 30, 2010. A Grand Opening Event including the Duluth Superior Symphony Orchestra is slated for Friday, December 31, 2010.

It is only slightly bigger than the present arena. During hockey games the current one seats 5,100; the new arena will seat 6,000. There will be more leg room between seats, larger seats, three elevators instead of only one, 15 suites, some 2,500 square feet of UMD club room and 68 women’s toilet stalls on the concourse instead of only 15. Learn more about the new arena at: The Dream as become Reality.

Do you like bumper stickers?Â  I like to read them, but I don’t like to stick them on my car. I saw the bumper sticker on this car that said, “Adopt A Retired Racing Greyhound 1 800-366-1672.” So I had to stop and take this photo for Carol, who has a January post Greyhounds: A royal breedâ€™s changing fate: Racing home on her blog Carol W’s Blog.Â  It is about adopting Greyhounds.Â  Greyhound racetracks closed across the country in 2009, leaving up to a 1,000 retired racing dogs scrambling for homes. 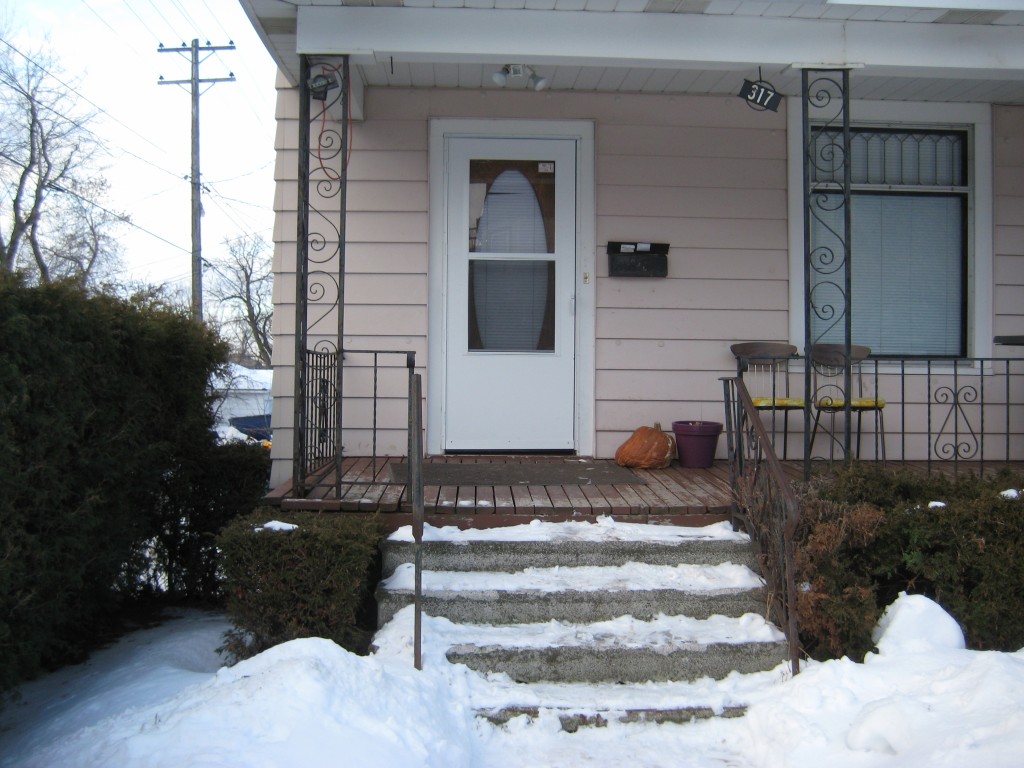 I know I can procrastinate, but I think it is time to remove the harvest pumpkin from the porch. I saw another house that still had Halloween stickers in the windows. Today is Feb. 17.